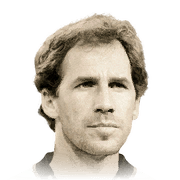 I used my untradeables to try my luck in the repeatable sbc. I got Baresi, so far my luck! Decided to give him a try. 5 games and saw enough, he is a worthless CB. To slow, to small! On higher levels he lacks. Varane is alot better. Still I didn't want to give up on this guy. Decided to switch him to CDM with SBC Casemiro (That guy is a sick CB!)

First game he was okay but not what I wanted. Changed from anchor to catalyst. Still not good enough, he felt too slow. Decided to try a shadow, he doesn't need the defending boost at all but with shadow he gets +15 acceleration. And there we go I had what I wanted! He played like Kanté just a little bit slower but fast enough to be decent. He is doing a very good job in breaking up the play and distributing the ball.

Give him a try at CDM with shadow (ingame switch) you won't regret it.

I wouldn't buy this card off the market but if you pack it.. ;-)

Decided to buy this guy as I felt he looked like a great icon Cb for 370k. I have to say I was bitterly disappointed. for a start his 94 defending stat is a complete lie. Feels very weak in the challenge and he doesn't exactly have the pace to make up for it. however, he isn't all bad he is very good on the ball and even wins some aerial 50 50's. Overall a huge disappointment and if you are looking for similar CB's just go for somebody like Ramos or even Azpilicueta.

Poor going into the challenge