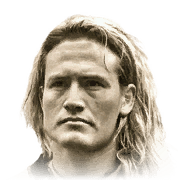 If i had to choose one word to describe him I would say: BEAST

I packed this guy in the baby icon SBC, at first i was quite disapointed since my friends got icons like R9 and Co... but i thaught why not give him a try...and it seems that with 1.6 goals per games it is quite obvious to say I was wrong... That is without including his assists...

He prooved me I was wrong to underestimate him just by looking at the stats on the card. I use him with the basic chem style and In game he's an absolute beast ! He will win every headers due to his remarkable heading and jumping stats, so it's never been a problem to score headers with him even against defenders like Ramos TOTY or Van Dijk TOTY. In fact, he's probably the best headers scorer I have in my team despite having pogba fabinho Arnautovic etc. Corner are juste like penalties for him: put the ball into the box and he will finish the job :D

Moreover he got this speed wich makes him IG faster than Auba or Sane, I'm serious even if the defender is 10 meters ahead of him, he will still reach his full spead before the defender and will just pass him just like Usain Bolt passes his oppenents. His ball dribbling is also Insane so he never did a bad control and the ball always stays close to him so that you can easily dribble your oponent even without skill move. His 4* skill moves is just a bonus :D

In a 1vs1 situation he scores 9 of 10 shots, and the one he doesn't score isn't due to him, it's just FIFA U KNOW... If you shot with his dominant foot, he will make sure to score or at least gain a corner but he will NEVER EVER miss the goal with his right foot. However, his left foot isn't as OP as him so when he shoots with his left foot the shot will be on goal but it won't be powerful enough to pass through the GK. But don't worry if he just needs to tap the ball in with his left foot it won't be a problem.

His passing is quite good actually, I don't remember doing a bad pass with him even long balls. But i would be sure to pass with the right foot if you want to ensure your pass.

Coming to his physicality... IDK how it is possible but absolutely every rebounds are in his favour ! He will just pass through the oppenents, but if he want to use as a Target Man, he won't be really effective. I mean he can protect the ball but if's against really strong players like Ramos etc. they will easily take the ball so one advice: keep moving with him

Finally, I'm absolutely not sad of my pack and I would say I'm rather lucky because he plays like a 92 rated striker so he is absolutely worth every pennies he will spend on him if u planning to buy him.