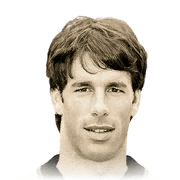 Van Nistelrooy, Goalgetter, Poacher name him whatever you want he will score for you.

A big striker good on the ball fights for every ball in attack. Runs into space in the box which is great for headers,

those he delivers on time and on target. Just like timed finesse shots which he scores regularly.

Volleys ( Reliable on Volleys, scored a real screamer in Rivals with him )

Pace ( With Hunter his Pace is just awesome, can make runs in behind )

Positioning ( Nearly at all times in the right position )

80 Stamina would be perfect

4 Star Skills would also be great for him,

Let’s start by talking about that he’s only for 300k !!!! I tried van basten , crespo , shevchenko and they were not compared to van nistelrooy he is a beast 63 games 90 goals ??? Thats insane