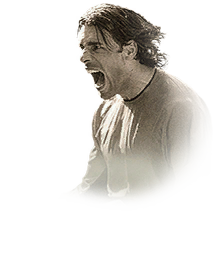 With already having Prime Bergkamp, Van Djik and patiently waiting for the Flashback Robben, seeing any SBC carrying a Dutch flag was a big turn on. Now at first, I was sceptical completing the Van Nistelrgoat SBC because of all the hate towards it. “Cards too expensive, might need to sell the house”, “Crappy card”, “My nan plays better” etc. But, with the Dutch flag being my guide, I set my eyes towards completing the SBC.

I write this, not only to share how incredible this card is, but also to stop all the Van Nistelrgoat slander. Doing the entire SBC took a bit of time but at the end of it all, it cost me approximately 1 million coins. With his price fluctuating between 2 and 2.5 million coins, I’d say he’s definitely worth the coin. Seeing an 88 overall team submission can be a bit daunting but with having various Weekend League cards and untradeables, it wasn’t too difficult.

Now, about this card. Where do I start? I could start by talking about his shot, his pace or his brute strength, but the one thing that stands out to me is his presence on the pitch. I’m not very technical when it comes to each stat, so I’m not sure which ones give him this ability, but whenever he’s on the attack, he adds so much with or without the ball. He’s always in the right place at the right time, players seamlessly work around him, make runs they weren’t making before and the ball loves to stick to his foot. Seems like he’s got the angel of EA guiding his every step.

Cannon. Absolute cannon. Even though he has 3 star weak foot, his 96 finishing makes up for it. Whether from in front of goal or the moon, he’ll score when given the opportunity. His consistency in finishing is crazy. I’ve only had one or two games where Courtois’ robbed him. But that’s FIFA for you. Other than that, you can feel his shot power and every volley he’s shot went top bins.

Pace isn’t everything. And that’s okay. I praise his pace not because he’s the Flash but because he get’s the job done. When he wants to, Van Nistelrgoat moves and shakes. Even though he’s a big guy, his pace and touch throw off defenders and give him the space he needs to bang em’ in. Reminds me of Ibra from a previous FIFA. His pace combined with his dribbling make for an interesting combo. He’s got one of those weird touches where if he take’s one big touch forward, your opponents defender’s are caught flat footed with their jaws on the grass. Even though 3 star skills may turn some people off, body fakes do the trick fine.

Lastly, let’s touch on his physical because most defenders can’t. He shields the ball well from tackle spammers and fends of defenders well on breakaways. I can always trust him to score a header from a corner once and a while. If you’re a cross-only type player give him a try. His heading alongside with his positioning really gives him the best odds at heading the ball in the back of the net. And 82 stamina doesn’t do him justice. He always has a good amount of stamina to finish out a game. I even keep him on during two halves of extra time. No hamstrings pulled, no problem.

I only see two minor problems with this card and they can be easily fixed with a chemistry style. His long passing isn’t too hot. But I use him more as a target man and my CAM’s always seem to be in the right spots for him to make an easy pass. He’s also not the most agile player. But what do you expect from a big boy like Van Nistelrgoat. Depending on how you use him, he can either be a God or a crutch. If you have your finger taped to the sprint trigger, then this card isn’t for you.

Seeing that he’s disliked by so many makes me sad. Really makes players like me question if this card is actually any good or if he’s a gassed up card. But the stats don’t lie. He’s a fun and exciting card to use. Don’t knock him till you try him.

-Finishes everything, even his lunch

-Makes runs you need him to make

-Ball glued to his foot

-Brute on the ball

-Nothing a chemistry style can’t fix

-Not the most agile player

-When used right, not an issue

-Nothing a chemistry style can’t fix