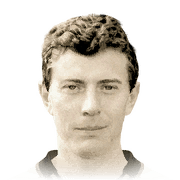 Butragueno is an outstanding player. I play him at striker and he consistently scores 2 goals per game. His combination of ball control, dribbling, balance and pace lets him easily maneuver around the opposing players. His lack of height is not a problem, that being said my playstyle doesn't require any aerial ability. He finds channels and pockets of space perfectly and angles himself to take an optimal first touch. I play Pjanic at CAM and a quick one-two is usually enough to unlock a defense. Once he is through on goal all it takes is a simple push of the shoot button and it is a goal. I have found that timed finesse shots are almost a waste of time with this player. His reactions and finishing are so high that it is much more efficient to simply shoot the ball rather than use a timed shot. The most suprising aspect of this card is his passing ability. His short passes and through balls are excellent.

-You will not be dissapointed.

-Despite his strength, his balance lets him barrel through challenges and fend off tackles.

-Has the ability to create distance between himself and the defenders with a large touch and doesn't look back.

-Reactions and balance let him finish while he is being dragged and pushed. Do not be scared to pop a shot.

-The weight and accuracy of his passing is sublime. His short passing and through balls are consistently perfect. Long balls are not a strength.

The best Striker i've used on this game so far. 69 games played 30 in WL (25 wins) 95 goals scored and 33 assists. i've used him up front on his own in a 433 and 433(4) as well as in a 41212 narrow. i rate him above every other striker i've used including C.Ronaldo Prime Larsson who partners him up top Griezmann, Prime Zola, Suarez and a few others.

In terms of pure finishing and goal Output Butragueno offers far more than his 1.2 Mill current Value and would reccomend to anybody that was considering buying him.

His Finishing is second to none on both feet, Inside the Box is where he shines with all types of shots, more successful than most with just a usual B shot and not as reliant on finesses despite that being his bread and butter. Outside of the box could possibly be better but isn't poor enough to bring down any sort of reccomendation. 9/10

Butragueno will constantly be a pain in an opponents side and has an uncanny skill of constantly being onside, one of the only players i've played balls to while thinking he's off for him not to be, His pace is exceptional especially over the intial few yards which makes him excellent in sharp turning and stop and starts. He will very consistently be on the end of rebounds or bounces which is very handy with current gameplay. His Dribbling and effectiveness to create a few yards and finish is as good as anyone i've encountered over the last few years and is what i would consider IF Ben yedder would be on steroids. 10/10

He's not Xavi or Iniesta but don't get it twisted simple A passes to players in a small radius are no concern for him, if you're looking for someone to carve a team open this wouldn't be my pick but for quick movement and tiki taka style play i could see him being more than suitable. 7/10

Probably the obvious downside would be his size at only 5'6 and his lack of strength which does exist but is better than expected his high balance and low centre of gravity makes him very tough to pull over and hard to take the ball off of, in comparison to Prime Henry in last fifa and his lack of balance i find Butra a lot more effective when running with ball strength wise. he won't barge anyone over but he has enough to make me question whether this was a con or a pro which should say a lot. 7/10

Decent stat wise but winning the headers would be the issue, my style has no need for headers but if you want to play down the wings and cross you're probably wanting someone like Trezeguet or Larsson if you're still looking for pace. 4/10

Let me set the scene. I was once a FIFA player struggling along in Division 3 of Div Rivals for as long as I could remember. Due to quite frankly extortionate FUT Champs rewards, one day a wild 87 rated Butragueno came sprinting into my price range and one-punched 87 Timo in the noggin whilst simultaneously throwing him out of my slightly above average squad. The man then single-handedly carried my sorry self into Div 2 - a place where I felt more out of my depth than the Titanic in a tsunami. After being near relegation for a matter of weeks, more ridiculous pack luck allowed me to upgrade baby Butra to the 90 rated Spanish wonder above.

I would just like to stress how much of an upgrade this middle Butra is from his baby card. Due to this stupendous player, as of today I am now in Division 1 of Div Rivals having only lost 1 of the 12 games I have played with him. I play him as a RS with Hunter in a 4-3-1-2 along side 92 Lewandowski and above Bale. I have played with every high rated gold card apart from Ronaldo, and I can safely say that this man - and even his baby version - is the most impactful player I have ever used as a striker.

Pace: Having played with 87 Werner and 88 Mbappe, I can say without a doubt that he feels faster than both of them - something I didn't think was possible until using this Butragueno. He is more explosive than a tactical nuke landing on a curry house. In a game filled with people saying that pace doesn't matter anymore, using this card makes you realise that the pace mechanic can still be abused. Another game-changing attribute is that he barely ever runs off-side. I am not sure if this is down to the combo of a medium attacking work rate and high positioning, but something enables him to always stay on the shoulder of the last defender. To summarise, his pace is second to none and without a doubt a 10/10.

Shooting: Butragueno is consistently clinical in front of goal. Whilst his finishing, positioning and shot power feel magnificent in-game, his biggest shooting pro is his 5-star weak foot. I have noticed that people don't seem to know what Butra's strong foot is or that he has a 5* weak foot in the first place. Therefore, there is always an angle for finesse shots to go through. His long shots feel somewhere in the high 80's as well, so don't hesitate when it comes to distance shooting. Adding to his already extensive selection of shooting attributes, he also possesses the finesse shot trait. Say no more. - 10/10

Dribbling: He feels incredible sharp and evasive on this game and even more so than his stats suggest, probably down to his low height and weight. He feels noticeably more agile than his baby version and is the perfect player to use if you enjoy quick turns and confusing defenders with dribbling - 10/10

Passing: His passing is surprisingly good actually. This could be due to his very high vision or the fact that Butra's legs have been fashioned from the same tree as the Elder Wand, but regardless his passing is much more than satisfactory - 8/10

Physical: Obviously, his physical is lacking because he is 5'6 and has very low strength. I will however say that this is a con that doesn't significantly impact his performance. He does get pushed off the ball, but can often resist big defenders due to his high balance and low height. His stamina is also great and I never need to sub him off.

To summarise, this little Spanish wizard is the best striker I have used at the 1.2m price range and should be a go-to pick if you are after an electric, clinical striker.