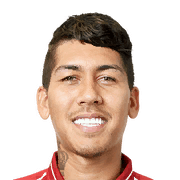 So i got this guy red in my fut champs reward. I wasnt really happy because i already have Road To The Final Mkhitaryan in my squad but i decided to trie firmino eitherway. And i can say it payed out he dribbles the ball like messi and ronaldo al his timed shots find the back of the net and his passes are some of the best i have ever seen the way he passes the ball past the defence to my potm auba is unreal. i would recommend to use him als a CAM but i think he would do fine at striker because of his excellent shot and dribbles. This concludes my review of IF Firmino

Could be a bit faster (but fast enough for a CAM)

I first bought 87 Inform Roberto Firminio the week he came out, and used him for almost two months into the game. I played him at the CAM role and was instantly surprised by the versatility that this player possesses. Yes, his 78 pace leaves a little to be desired, however a Maestro chemistry style boosts him to the ultimate attacking mid ( adding 89 shot, 87 passing, and a massive 94 dribbling). Firminio's distribution of the ball to outside midfielders and strikers is beautiful, placing touch-perfect passes that led him to an assist almost every game. When you decide to hold the ball on him and take a shot, he finds the back of the net almost every time when inside of the box, and is a wildcard in regards to long shots. The most surprising factor of this inform card is his height. At first look, a 5'11" player with only 83 jumping and 78 heading accuracy does not seem to be an aerial threat...this perception would be wrong. I can confidently report that Firminio is more than his aerial stats...he wins almost every header. In the box, off of a goal kick, you name it. I have seen Tiny Roberto jump over the likes of VVD or Ramos in order to score a goal or keep possession. I know, that sounds crazy...but play with him and you'll see. The one negative I find in this card is the lack of harmony between his work rate and defensive/physical stats. With a high attacking AND high defensive work rate, Firminio is constantly running from goal post to goal post (even when I set his custom tactic to "Stay Forward"). This constant sprinting does not mesh well with his subjectively low stamina and his lack luster defending stats. With this said, I still believe Firminio's inform is one of the best EPL CAMs for his price range (varying between 100k-120k). Place this beast on your team and you will not be dissapointed