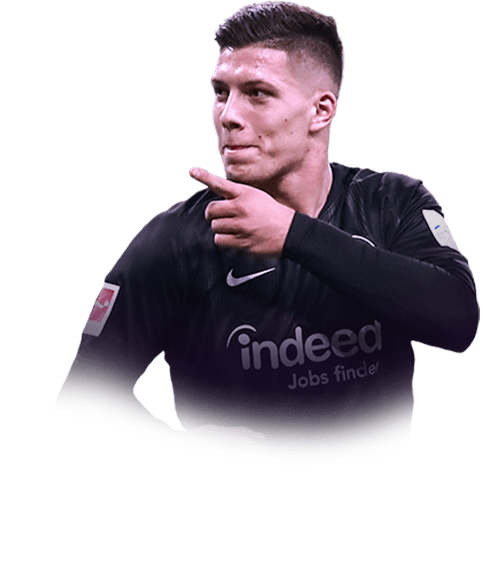 Ive had a Bubdesliga squad for a while now just because it is great value for money. I have Rivaldo prime on the left due to limited left wingers and Jovic matches his shot.

I have tried IF Lewandowski and SIF Werner and all i can say is Jovic is their beautiful love child, lost at birth and raised by Serbian wolves. He is tall, fast, strong, decent dribbler, great passer (not long), precise header (cant jump but 6 foot), 4 star weak foot and most of all he has a shot like US Navy SEAL Chris Kyle. He runs past VVD and Varane as if they are nothing more than pathetic toddlers and ballistas one right past whoever is stupid enough to stand inbetween the posts.

Honestly sell your Lewandoski and Werner and buy him.

Did i also mention he is a wizard? He magically made my SIF Werner turn into a disabled Morata.

Yeah he only has 3 star skill moves but do you honestly use 4/5 moves all the time? He doesnt need them when he is out muscling defenders and rocketting in goals from outside the box.

Medium/Medium work rates aren't the best but tell him to stay forward and get in behind goal.

His weak foot isn't an issue he hits them with his left and with his right.

Finally just take a look at his Specialities, you are paying next to nothing for a Serbian Icon here.

This guy scored 18 goals in 10 on weekend league for me.

If you have a Bundesliga team use him up front and any IF/POTM behind to create a deadly duo.

I have been searching for good bundesliga strikers all year since I did FB Gotze and I can say that FFS Jovic is the best striker in the bundesliga. This card really has a bit of everything that you want from a striker this year and I cannot recommend him enough.

One of my favourite strikers in this game, you can beat deffensive line with him with no problems. He is crazy in every aspect of the game , heading ,dribbling, running, not bad passing, very strong with the ball. He can provide you a lot of goals, only him and RONALDO TOTY got same specialities wich means something, he is just crazy. He's got 2 cons witch is late game stamina, i skill moves 3 stars but he gives you 5 star week foot .

3 star skill moves but just shoot with him who cares about dribbling whole pitch .