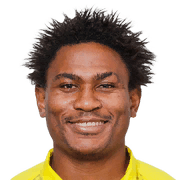 Wow. What a player this guy is. During this edition of Fifa i've played excessively until the end of January where I lost my spark and having reached Elite in almost every weekend league thereafter I sold everything that could be sold and bought packs. Having used most of the strikers at that time, R9 90, CR7 Werner TIF, Kluivert Prime, Luis Hernandez Prime and so forth I have to say that Tawamba has been the biggest change in this game for me. Not having played for 3 months and going in to this WL getting Elite 3 with 23-2 says something about this guy.

He's a behemoth, nothing will stop him from scoring, he bangs them in from all angles, WF, finesse shot, timed finish, low-driven shots and running behind the defenders just holding them away and easily banging it in.

Of course he's not going to be as good as R9 Prime, CR7 TOTY/S but he makes the same amount of difference if you play him to his strengths, which could be annoying at times.

I told my buddy about this guy and the first game he scored 4 goals in 30 minutes, my friend decided to watch my next 5 games and he had 2 words for this guy, "Cheat code". No defender could stop him, ever. This ended with him scoring 49 goals in 25 games. I absolutely say that this guy is a MUST have in your team, whether it's on the bench or from start. Keep your gameplay easy with him and don't try to run around dribbling in tiny spaces, won't work.

Shooting - 9/10 - As we all know, this is just a 88 rated TOTS - giving him a 10 would be unfair due to there being even better shooters out there. His long-range ability to score from 35M is not up there with Ronaldo. Finishing however is just an amazing feeling.

Strength - >10000 - This guy is as strong as Usain bolt is fast, even VVD TOTS/POTY didn't dominate him physically.

Heading - Powerheader - Wins against most defenders, would even like to call him a Rocketman jumping that high in to space - Elton John would be proud of him.

Pace - 10/10 - He's incredibly fast when he's just running straight towards goal, unstoppable with that amount of STR and speed.

Incredibly cheap - Might be most value for coins in the game?

Made the game fun again for me(!)

Clumsy - A really clumsy player, can at times feel as he's turning a bandwagon around, using the 1st touch fake shot is very successful with this player as he taps the ball a few feet away and just demolishes the defenders.

Passing - Nothing spectacular which I can find annoying with a ST - then again, what striker has AMAZING passing?

WF - He has a good WF as he has 99 finishing but at times this damned left foot can disappoint your guts.

Dribbling - He's not a dribbler what so ever. You can use your flanks to do that.

After having some spare coins and Ibra having a terrible WL, I decided to give this man a go... and OMG! What a beast, he feels like a better version of Ibra because of his balance, wich is not good at all, but he doesnt fall on the pitch every goddam time someone touch him, like Ibra does, due to this he feels a lot stronger. I used him as my RS in a 41212(2) formantion and in 20 games of WL he netted 21 goals and made 6 assists, and he clutched me so many games, with the winner goal in injury time or the right play or pass. his pace is very good, due to his 99 sprint speed, his shooting is insane, he finishes everything inside the box, but his longshots arent so good, neither the finesse shot due to low curve, but you just have to blast it beacause the goalkeeper will cross the line alongside with the ball. His passing is OK, if you dont try to do some crazy trough balls he should be able to do the job perfectly. Despite havin bad agility and balance he doesnt feel clunky at all, but he is the slow turning tive of guy. His physical is the best part, this ANIMAL can hold the ball for years and wins every aerial duel, doesnt matter if is TOTY VVD or Maldini who is marking him. Overall I think he is very similar to Ibra, but he feels stronger and the Balance upgrade REALY does the difference even if means if you are loosing some passind and a WF. As Thanos once said "A small price for salvation".

This guy is insane! 99 finishing, 99 vollies and 99 headers when using hunter he can finish anything in the box and put him near post on corners he'll scored 9 times out of 10.

99 strength means he can hold up the ball against any defender and find a team mate and often does with catalyst he makes worldie passes.

can sometimes have games where he misses every shot