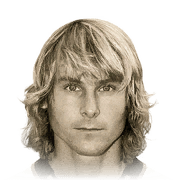 Before picking Nedved up for 1.19 million coins I had heard excellent things about his prime (91) card. It is safe to say he does not disappoint, I am playing him in centre CAM In a 4-2-3-1 formation with Griezmann to his right and prime Zola to his left, and he suits the role perfectly. He is the engine of the attack, and leads the front 4 forward. His pace is better than I thought it would be, although he does feel about what his card says. His 5 star weak foot and 4 star skills allows you to craft your attack in any direction, his passing is point perfect, long range or short. He can dribble creatively in tight situations, whilst providing adequate hold up play with his height and strength. His shooting is incredible, with 94 long shots, 92 shot power and the distance shooter speciality, he can float finesse shots top corner from anywhere on the pitch (on both feet). His finishing feels much stronger than 84. In the box he can place finishes sneakily round defenders and the keeper, for me he has scored impossible angle goals and is very very reliable with the easy finishes. He has been fantastic and I will not be replacing him any time soon.

Hey guys I'm back. You might remember me from my FIFA 18 baby Del Piero review. I know, I know you might have missed but now I'm back in full force with another review. Anyway Pavel Nedved is an exceptional player. I play him at central CAM in a 4231 on stay forward. With his amazing ball control and passing he is one of the best playmakers I have used. He has an amazing shot on him aswell, able to put the ball in the back of the net from any distance. Personally I think that aggression is an underrated stat in FIFA and with the high aggression he has, he is able to win most 50/50 duels. If you are thinking about locking coins in a sbc or just buying him of the market you will get your moneys worth. GL in WL.

(All games in WL)

1 word. Wow. I'm a pretty average fifa player with basically no skill whatsoever, but boy does this guy make me feel like a God. His la croquetas, his finesse shots, his free kicks, his long shots are all insane. 5* weakfoot is insane. He literally scores from anywhere and the keeper has no chance as his shot power is 99 with a hawk. His crossing is great. If your thinking of trading in Rivaldo, or anyone other than the likes of eusebio, pele, ronaldo, do it. You will not regret it. He feels like a piece of string on the ball just weaving through the defence. He is the hands down the best player I have used in a while. shoot with a normal shot and it just flies into the top corner. I scored a hat trick of long shots against 92 de gea with him. He is a God.