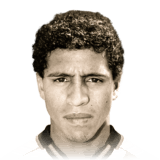 You voted, and here it is.  If you have no idea what I am talking about; a week ago FUTBIN posted a question on Twitter asking which of the available ICONS (12 or less ICON Swap cards) you wanted to be reviewed.  An overwhelming 50% wanted to see Roberto Carlos da Silva Rocha and we aim to please.  So much so that this review will act as a two in one look at the Brazilian.  After 10 games as a LB in the 4-1-2-1-2, I felt I had a solid understanding of what Roberto Carlos offers in defensive positions, and I just had to set him loose in the middle of the park for a few matches.  A few matches turned into an additional 10 and leaves me with small questions about how I will utilize my early swap going forward.  As a quick side note: I used Ndombele as my make shift LB while Roberto Carlos was gallivanting in the center of the park … and he was actually flawless, just proving how well-rounded this card can be.  But back to business, Roberto Carlos was the “Bullet Man” in the following squad: 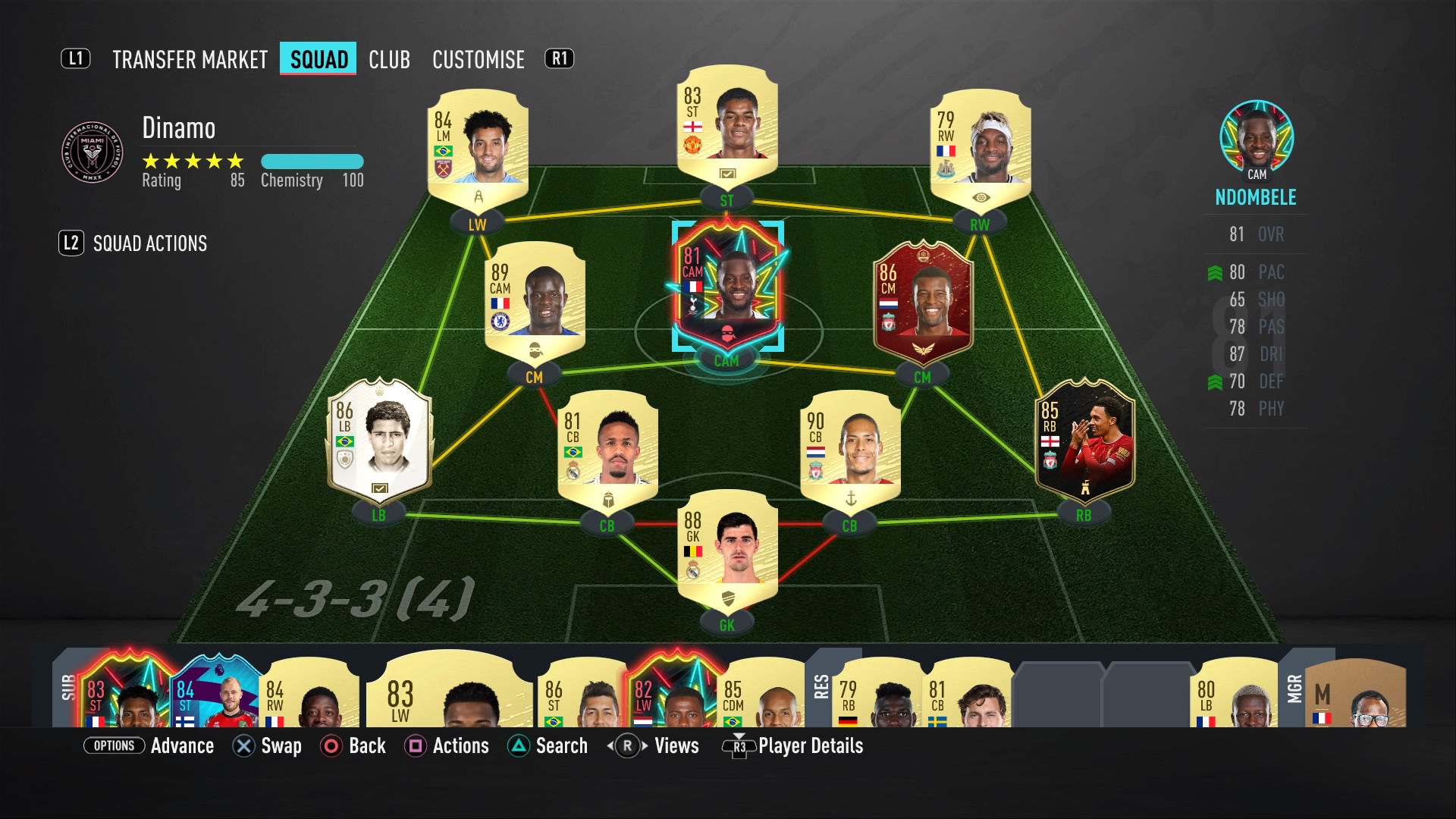 The highest rating I have given out for this FIFA and I feel it is completely justified.  Roberto Carlos is one of those cards that in FIFA 19 would have been so good, but unusable due to his lack of height.  In FIFA 20 he is incredibly dominate and I have my LB sorted for a solid period of time.  As I previously stated I also gave Carlos a run out in the midfield and primarily as a CAM in a 4-1-2-1-2 formation.  Here is a breakdown of both positions and why I believe this card is value for time, and yes this does take time; playing stacked teams while using First Owner Serie A squads, followed by trying to get a somewhat useable CSL GK and backline does lead to serious frustration… but this guy is so worth it.

If you do not utilize instructions, or want this guy to get forward, then you are in luck.  He marauds up and down the touchline all game long, he can defend but will get out of position.  I used the BACKBONE chemistry style for these 10 games and the 91 CROSSING and 90 PASSING were pinpoint and fizzed into feet.  On the defensive side of the ball, 85 AGILITY and 89 BALANCE are perfect for jockeying opponents and he played countless strikers off of the pitch in that short spell.  Since my review, I have continued to utilize the Brazilian in LB and he is just so solid.

In the first 10 LB games, I won’t lie, I let about five 25-30 yard hammer blows fly from distance without a goal.  He did produce eight corners and the excitement led me to wanting a small debut in the middle of the pitch.  94 ACCELERATION and 91 SPRINT SPEED is no joke and this guy flies past opponents.  In the LB it was incredibly useful, but as a CAM it was even more noticeable as I simply pulled away from trailing midfielders; opening up space for passes or attempts at goal.  With DEADEYE or FINISHER, you can turn his rocket of a left foot into a homing missile for the top corner of the net.  The 8/10 rating as a CAM does come down to two things: 2 STAR WEAK FOOT & 3 STAR SKILLS.  Otherwise, he would be useable in just about every position on the pitch.

Truthfully, there are not many negatives that go along with this card.  I have sold my Andy Robertson and plan on using Roberto Carlos for at least the next few months as my LB.  Roberto Carlos might actually be the perfect ICON Swap choice and not just because of his quality, or his versatility on the pitch.  If you are like me and hate spending a ton of coins on your defenders (says the guy with VVD), but you know it is important so you do it anyway, Roberto Carlos is the perfect choice.  The defending is solid and I have not used a better option yet, and if you want to add some quality going forward he has that in spades as well.  Finally, if your squad will go through a lot of changes within the span of a month, it will normally be in forward positions, new and shiny cards like Ben Yedder and Griezmann will take the place of your frontline ICON Swaps and condemn them to the bench.  I honestly see Roberto Carlos as a big part of my squad in the future, until they bring back El Tornado crossing and I need a 6’7 left back. Cheers for reading. 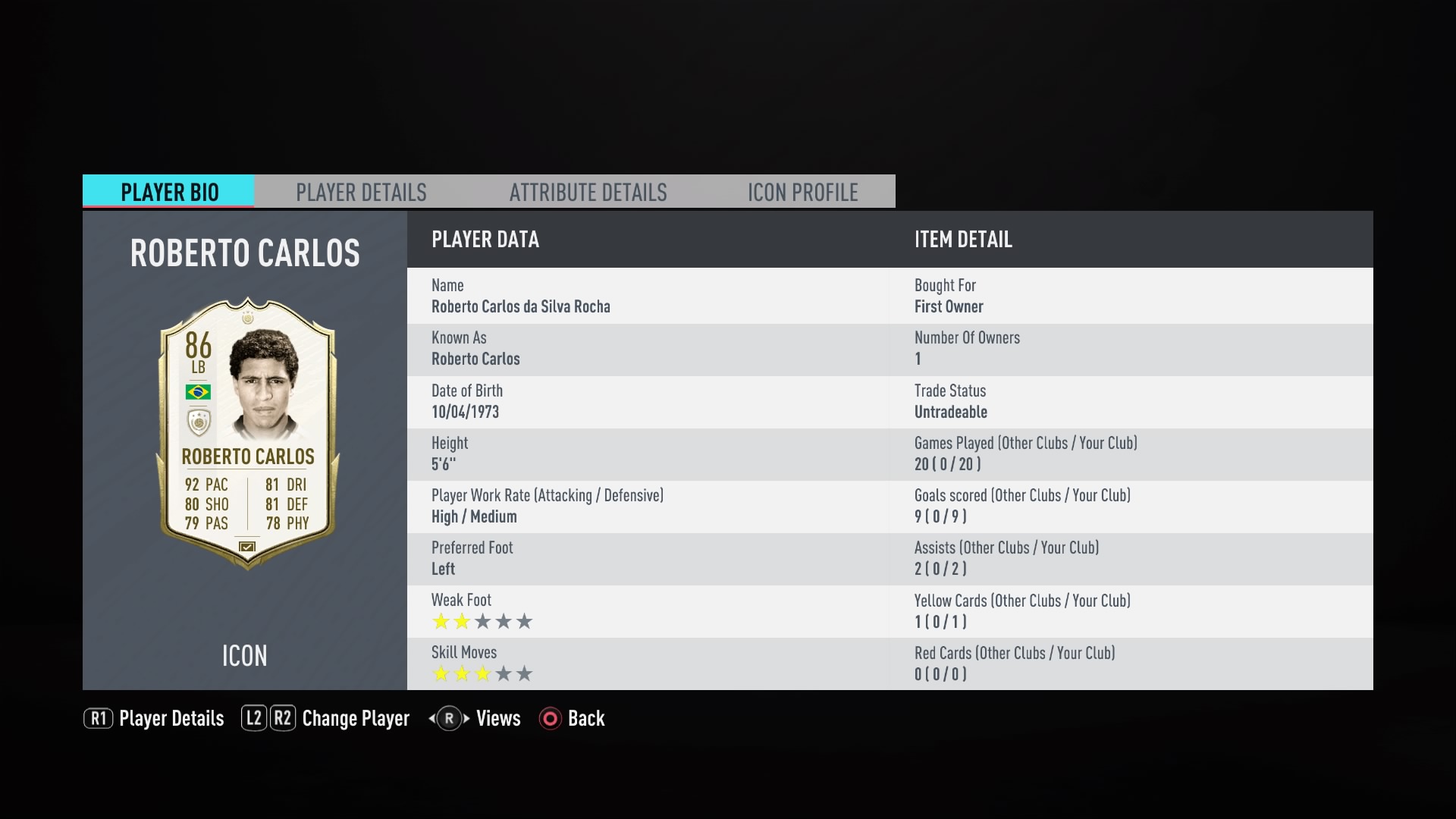 He blew me away so much in just a handful of games that made me write this review - which is also a first to me - so please be kind.

As most of you probably i struggled immensly on what kind of icons select from Swap (chapeau EA: this is great as no one wants to see all the same opponent squads throughout WL).

For me was always clear to take a defender and it came down to waiting for Zanetti or taking R.Carlos (and Nesta). To make sure, i got him first on transfer and than directly afterwards decided to get him from swaps (so you may not have to do this anymore after this review hopefully and save yourself the tax).

R. Carlos does what he was known for. He is incredible fast, is able to get back to everyone - even the likes of lacazette etc. But he is not only fast but his strong physic helps to make short process of everyone. In this Fifa he fits the meta for backs and i felt like my left side was safe having him back there. Nevertheless the true strength is the offence - next to his strong balance and agility (which just feels amazing) his pinpoint passing and acceleration make him a true weapon which is why he will not play very often in his original position for me. I am really in love with 3-5-2 this year and since there have been many great options for the the RM (scream Navas is my first choice here) - i was directly having R. Carlos as coutnerpart in mind. And he does it just perfectly. Wherever I need him - offence or defence - he is there.The funny thing is that somehow you dont see him often, but when i needed him (like twice in last 10 Min in WL), he is there to provide the last pass or finish himself - and that so clinically. His leftfood is just a hammer. I know many will be offset with his 2*WF and 3*SM, but this is no dealbreaker for me at all - even at CAM. While i personally rely not much on dribbling skills (and find it quite annoying sometimes), the weak foot is not really noticeable and similar with last years robben, i even believe that it make the playing experience with RC better and realistic. With his overall package he is just pure joy to play and dribble. He reminds me a little of last years Birthday-Salah and the TOTS-Dybala from 2018 - moving him in the midfield (especially as CAM) is so precise and especially when you like to quickly outpass your opponent and move from the side to the center he is pure gold.

Freekicks: Ok, never would have though that i would ever specifially mention FKs. But i guess writting about R. Carlos and not mentioning Freekicks would be weird. What can i say - again a first. Directly in my first freekick he nailed it directly in the corner. Needless to say: also the first time i scored a direct FK. In all honesty, RC just opened up for me taking direct FKs at all - normally i wouldnt have even looked at the stats as i find the system this year just awful. But RC is just amazing. I dont know if it is just so fantastic in my head because i like to recreate old plays and love the idea to score FKs with RC (btw, any chances for a juninho icon EA?), but since i have RC i scored two more direct FKs and hit at least 3 times the crossbar. I feel a little like in 2018 where after being in a good position i was confident that this could lead to a real chance.

Summary: RC has it all. He is the most solid Defender you possibly could get for LB - but could literally play every other position except GK. His speed, precise dribbling and shot power make him a great package, and an amazing CAM option as well. Not only did he open FKs as an option for me but gives me real joy - it is just real fun to play him. So on many accounts a first for me and i know I will enjoy him for a long time. As you may see, the stats are not so impressive. These are from the swap version and only from this WL. So if you are still doubting on which icon to take. I fullheartedly can recommend him, and you still have the opportunity to take another icon as well.

This guy is exceptional. like i said he is everywhere, he controls the left side of the pitch running back and forth all by himself. One second you attack with him next second he is back in defense making a tackle. you probably wouldn't even need a LM or LW. He is super fast with the ball at his feet that players cant touch him. But one thing stood aside from the rest of the pros about him, his Free Kicks. We all know how difficult it can be to score free kicks in this game but this guy makes it look easy. If placed right Roberto Carlos will probably score every single free kick. Any way i would HIGHLY recommend doing him in icon swaps.

When ICON Swaps were released and I was going through the challanges I definitly wanted to go for Butragueno because of its pace, shooting and 5* weak foot. BUT then I changed my mind and was going for R.Carlos and Nesta to get a solid defensive line. To me it was clear to first aim for R.Carlos because back in the days I loved to see him play and his left foot was not from this planet (I'm a left foot player as well :D). But now let's talk about his abilitys.

I play him in a 4-1-2-1-2 (2) formation as LB with Militao, Lenglet and Walker on defense. I was pretty hyped about his pace and he didn't disappointed me at all. For most LBs like Robertson, Angelino and Roussillion it's nearly impossible to get after a fast RW when you don't have a perfect positioning. But R.Carlos is fast as hell and he doesn't get only after the attacker he gets the ball as well so easiely. I really love his tackling style and how he runs. The only thing I could complain about him is his high rated attacking work rate. Sometimes when you go forward R.Carlos runs down the line like he is a LW (I always use player instructions to let my LB and RB "Stay back while attacking").

In fact you only need 11 ICON Swaps itmes R.Carlos is really worth the effort and you should aim for him if you wanna upgrade your defense. I really think he is the first player I will set in my starting 11 for the rest of FIFA 20.