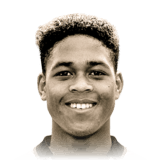 Like the Title says, I see him as an absolute win. Memes aside he's such a good deal for 12 Swaps, he got what like about a striker (Tall, Fast , Strong and a Great Finisher)

I actually used him for 11 games one game where my opponent got DC and didn't count even when i was winning (Thanks EA) and yes... he scored the winner also all the 11 games were FUT Champs.

A lot of people are skipping him for his Dribbling and choosing Crespo instead because of that, his dribbling wasn't that bad and he was decent with the ball. IMO his strength and run ups were good enough to make me forget about his dribbling.

For a 12 swaps he's a must get espically if you're a fan of phsyically strong yet fast strikers like Williams, Depay, Vardy you'll definitely like Kluivert

Great finishing and 1v1's (Despite the 79 composure)

Passing (Not the best but not the worst)

chose kluivert with icon swaps and I didn't regret that choise. before my record in WL was 17-13 and now he has pushed me to 3 consecutive gold 1 finishes and divison 3. This guy is an absolute monster in the box and will finish everything for you with both his feet. he's is going for a bargain at the moment and i will definitley recommend him.

-complete striker with both agility and strength.

-passing does the job and is better than most other strikers

-pace are amazing combined with his strength.

---you cant expect anythig more for this price