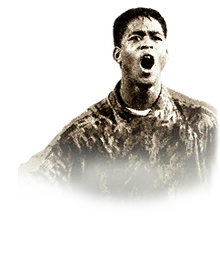 I tried all Dutch strikers including moments van Nistelrooy, moments Bergkamp and non-icons such as Depay RTTF and Malen FFS, but I must say Kluivert moments is on another level.

He is always on the correct spot to score easy goals but he also helps me out in games I have difficulty breaching the opponents defense. This is especially where he (and Cruyff) are different. Van Nistelrooy moments has scored me lots of goals too but in 50/50 games he rarely helps me to win it. Kluivert has a cheat factor here by winning crucial duels and 4* skills in combination with his agility. This guy feels so much more agile then van Nistelrooy moments.

I use Kluivert in a 4-2-2-2 all Dutch squad as target man, stay forward with engine.

Stamina 82 is enough for the whole game.

I needed to buy a icon striker for my team so i could get quaresma on full chem, because i wanted to try him. So i saw kluivert had a decent looking card for 1 mil, and i could also buy a decent right back. Ingame i used kluivert as a striker, and he was so bad. he could not finish to save his life, and when i tried dribbling he took forever to turn around, only reason he have goals i bc he scored some bs goals for me.

He is the worst striker i have used this game, he is so bad. when i had him in the box on his prefered foot (right foot) he could not score, no matter how could a position he had. He also not protect the ball against any player.

His pace did not fell as good as it should have been, he got often got out runed by the likes of ramos(gold), hummels (flashback) and boateng (flashback), and all chem styles i used should boost his pace even more

his passing was also shit, when i tried to pass to someone closs or far it rarely made it to the player i wanted to pass too.

I tried several different chem styles, inculding: hunter, engine, hawk. and nothing was better than the other.

The only good thing is his nation, bacuase many top player are from the Netherlands, and his stamina was really good he could play for more than 90 min.

with all this being said i do like to skill alot, and there for i have okocha, saint maximin and quaresma because they are 5 star skillers, and they fell good on the ball.

All in all the worst player i have used this fifa

DONT BUY HIM, NOT EVEN CLOSE TO BEING WORTH OVER 1 MIL

i Would at most pay around 200k for him

For context i finshed elite 3 and i mostly blame kluivert for not finshing in elite 2, because he missed so many sitters, and couldnt not help my team in any way, and in the last 5 games i started by switching kluivert for håland 87, whom i also dislike but he is still better than kluivert

link, good nation, and he is ofcourse icon