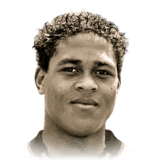 This guy is unbelievable!! I play him as a single striker with wings with tactics set as mixed attack. He has great hold up play with his 6'2" frame and great pace to get in behind and stay in behind once he is through. Clinical and easy to use as a finisher and has been averaging almost a hat trick per game for me over 40 games in weekend league and division 4 rivals. He single handedly carried me to 23 wins in my last weekend which is the highest I have had this year by far. I have used Scream Ibra and lewandowski as well as comparable strikers and neither of them come even close to Mid Kluivert as the complete striker I've been looking for. If you are looking for an easy to use goal machine that you can use in any team BUY MID KLUIVERT. This guy is end of year team ready I cant see myself selling him for any body.

Honestly nothing (HE IS A BEAST) but if I have to be picky he can be a little clunky at times on tight turns at speed which is expected when you buy a 6'2" striker. I have been using him with hunter but im sure a sniper would eliminate this if anything.

This man is amazing. I see a lot of disrespect on him for no reason. He has a shot which feels like a cannon. He has those ghost stats like his agility and balance. If you are unsure, then slap an engine on him. I personally use a hunter on him to beat those ridiculously fast CB's. His passing is great as he can play as a False-9 and hold up the ball or, play quick one two with your CAM/Second Striker.

His passing does not feel like his stats. It is much better

Tall and can hold up play perfectly.

Could be a bit stiff. (Put an engine on him if need be)

Tall, is not nimble like a butragueno or zola for example

I tried this card as a striker to back up my butragueño. I was expecting alot, as an Ajax fan I hoped that he would do well. I was really let down. Something just isn't right about this card, and I can't really put my finger on what it is. His individual stats don't suggest this, but he was really bad. I found myself performing much better with Bolasie off the bench. Even Iñaki Williams is better. I don't reccoment him. If you have money for this card, there are better options. Go for an aguero, an Aubameyang, Ian Rush, Jari Litmanen, anything.

-He can hold up the ball, his strength allows him to do that

-He can shoot, though sometimes it was quite inconsistent

-His height allows him to win headers

-He has enough pace to go around, though I found myself being bullied by a god damn Rudiger.

-His dribbling SUCKS. It is awful. You can not dribble with him

-Passing is woeful. Can not pass even if his life depended on it

-Something is not right about this card. Its just like Hazard for me. I don't know what it is but its just off