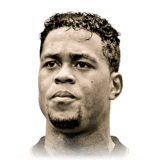 Welcome to the review of my man big boy Patrick Kluivert

This is my first review ever, so let me try to give you a realistic view on this card.

First of all, I am a division 3 player, playing for Gold 3 when I can play fut champs.

I do not have the time to play a lot and this fifa has been one with a lot of ups and downs through the year so far.

I struggled a lot with finishing and I lost a lot of games due to this so after a while I saw myself playing less and less fifa.

After a few weeks I started over and had a bunch of coins leftover. I love to do SBC's, so my coin total never comes higher than around 500K.

Then I saw this guy, Patrick Kluivert, the Prime one and because I am a Ajax Amsterdam fan, I could not resist buying him and putting some untradeables around him (You can take a loot at my squad)

Kluivert did not disappoint and even though Fifa has been a little meh all the way for me, I really started to enjoy it again.

He is good at 1 on 1 finishing, even though his composure is not that high.

He finishes everything inside the box with his near post power shot or a power shot across the goal.

Outside of the box he feels great with his finesse shots and scored some insane bangers for me!

He also caused a lot of rage quits from my opponents which almost made me believe that I am a top 100 player, ghehe. (Got a reality check after a while, but hey, gotta love the feeling of a rage quit)

He feels great and if you have the coins, why nog try him? I've used a lot of Icons at striker, but Kluivert will stay with me for a few more weeks I think!

Thanks for reading, cheers