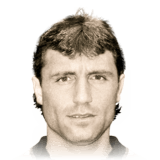 Before i use the middle icon Hristo Stoichkov, I tried a lot of other Strikers like Baby Shevchenko, Agüero, Neymar... but no one was as good as Stoichkov!

So, here's my review about Hristo Stoichkov Mid Icon:

Pace [90]: He's fast, give him a hawk chem style to boost the pace to 95, and he will be a quite decent pacey strikers. With his insane pace, instructs him with get in behind, so he will make a run through opponent's defender.

Shooting [90]: This is his best stats! Eventhough the base shooting stats is same with pace and dribbling base stats, but the in-game stats tell it differently. You say it, ordinary shot, power shot, finesse shot, chip shot, volley, and other shots, it won't disappoint you. Especially if you use the time finish. You just love to shoot with him if use him in your team.

Passing [87]: For a striker like him, his passing is quite decent. Any passing you use with him is okay, from short passing to long passing. When he's in the flank, you can try to cross to the middle with him, because of his 90 crossing. The 89 curve is stupendous! This stat that makes his finesse shot is unbelievable.

Dribbling [90]: He is an agile player. His dribbling is so great because of 89, 90, and 89 at his ball control, dribbling, and composure. You'll rarely lose the ball when dribbling with him. His composure also makes his execution when being pressed still great.

Defending [48]: This stat is irrelevant for him because he's not a defender. We can only talk about the 80 heading accuracy. It's an okay stat, but considering his height is only 5'10", you'll rarely get the chance to head the ball. He will still do the job done with headers if he get the chance.

Physicality [84]: You can use hawk chem style to boost his jumping to 88. It's one of his liabilities. His stamina is fine, i can assure you he can last until penalty kick (because of his med/med workrate). His strength is only 81, but because of his exceptional dribbling, you can avoid the opponents with his dribbling (or skill moves, he's 4-star skiller). The 93 aggression makes his movement quite fast, even when he's not on the ball.

This guy is incredible, I noticed a lot of people saying play him CAM which I tried but because of his frame and play I just didn't like it so I played him LAM and omg this guy is fkn insane!

I play 4-2-3-1 (Narrow) and I play him LAM on balanced with Hunter. He plays just like his card states, he's fast, ball sticks to his feet, he's very aggressive and strong. Even though he may not be as fast as other wingers his strength and aggression makes up for it as he's still able to hold the ball and use his body to out muscle defenders. Rather than leaving him on stay forward try him on balanced play because this guy helped me so much when it came to defending. The only problem was 3* weak foot but considering his shooting stats are already amazing that left foot is a rocket. I'm telling you 250k for him is 100% worth it.

I was looking for a good icon left winger and I found Stoichkov. He is an absolute hero, he can score from anywhere in the opponent’s 3th of the field with both his right and left. It feels like he has 5 star weakfoot because he is as good with his right as with his left. With a hawk he scores everything and has 99 pace I used a lot of players this fifa but he is definitely the best normally I get silver 1 in weekend league but with him I got gold 3 for the first time 2 weeks in a row. He is pretty cheap and he is absolutely worth it

you don’t notice his weakfoot