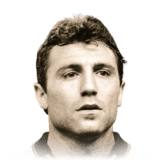 So I've had Son for the majority of my FUT and thought it was time to try a new player and I picked up Stoichkov and oh my god he is a game changer for me. He fits my playing style with drag backs, ball rolls and LB/L1 dribbling. He's dribbling is so fast and smooth that in the beginning I messed it up because Son didn't do that for me and I had to get used to it. Now I do play him at striker over Aguero because of his mid/low work rate and it works super good, the 1 twos they have are amazing. I tried him at cam but he would say too far back to get anything done. For me he was worth all the 751k I bought him for. Oh and the shooting, THE SHOOTING, oh my days. He's shots have way more power on them that 88 that it says, get him inside the box and he bangs every shot into the goal, I haven't had that much luck on the finesse shot outside of the box when defenders are back, they usually hit the post or the bar and either rebound or go out. And most of all he's rapid fast, most defenders can't catch him but he can get bullied of the ball by defenders like Varane and Van Dijk but combining his dribbling and pace and you can send defenders to tesco and get themselves some snacks.

Pace 9/10: I haven't had many others being as fast as this guy and I wasn't expecting that at all but I was pleasantly surprised, even though he's only got mid/low work rates he makes crucial runs to get into the box for a pass to just crush it in the goal.

Shooting 8.5/10: Even though I've said that he finishes everything in the box, he does only have a 3* weak foot and it can get you caught out sometimes and annoy you a little bit, but get that ball on the left and you have a goal everytime.

Passing 10/10: His guy's vision, short passes and long passes are incredible, he makes passes that I wouldn't even realize was a possibility, either between defenders for a teammate to get through on goal or lay it in the feet or right in front of teammates

Dribbling 10/10: For ME he's perfect, he turns fast, he got full- control over the ball at all times and with the balance and agility on the card.

Physical: 7/10: He isn't the strongest one, but he can ward of most defenders

So after playing Butragueno and Mbappe as my strikers to go i choose to go back to my plan from Fifa 17-19, playing a left-footed as right striker and a right-footed as left striker to cut inside and finesse. Where do i start? First of all his run through...oh my lord they are fckn amazing, it seems like he is always in the right place at the right time. With Hawk-Chemstyle his strenght is good enough to not get bullied off the ball by defenders. The most outstanding thing on him is his finesse shots, no matter which angle he gonna finish perfectly even if defenders are close to him he puts the ball in the back of the net just like Messi. So if you searching for a left footed striker i recomment you to get this Stoichkov, he is a Gamechanger for me and too many people are sleeping on him!

First of all, I used him in a 4-2-3-1 as a ST with a Hunter. He felt very quick and scored 51 goals in the Weekend league and as a usual gold 2 player I was elated. His left foot is incredible with all types of shots, he felt extremely quick and I really enjoyed using this card.

Felt strong when running through on goal