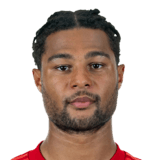 His real-life stats are currently 2 goals and 1 assists in 7 matches in domestic competition. He also received 0 yellow cards and 0 red cards.

Used him in 41212 as left striker alongside Lewandowski. He is so good at creating space to bit slow Lewa. Also speedy enough to take advantage of slow defenders combined with Lewas target man play. Used him in div5, so I guess opponents were decent this early in the game. Doesnt have a high stamina stat, but usually didn't need to sub him of.. Couple of times subbed him for Balde.

Tried Sancho before Gnabry but at least as a striker Gnabry is far superior to sancho! (And cheaper) Gnabry is eorth every single penny and has so good links (lewa, goreztka, havertz, tolisso etc.)

+Pace ofcourse is factor with him! Slapped hawk on him and he becomes blistering fast!

+shooting also with hawk. Inside the box deadly.

+Drippling; agile, good with the ball.

-Not the best passer, but still feeded Lewa like maestro. 9 games 9 assist tells it all.