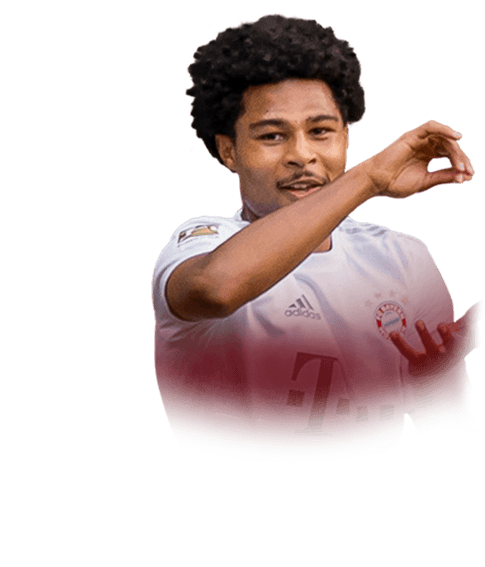 Normally I don't write reviews after so few hours, but I want to help people with the decision whether they should complete the SBC or not. I played 4 games and think I understand what Gnabry plays like. First of all, I expected the price of the SBC to be more like 250k+, so him coming in at around 170k is relatively cheap, especially comparing him to Sancho who is considerably more expensive. Gnabrys feels really quick, although the pace upgrade is not great for a +3 OVR. His finishing decent, he doesn't miss easy chances so his composure of 80 seems high enough. One of his best assets seems to be passing. I felt like he could play solid final passes to get assists and his crosses were accurate. The only downside I noticed so far is the stamina. The stamina is not bad with 78, but you can feel him getting tired earlier than other players on the pitch. In conclusion, I believe you should complete him if you have nice german or Bundesliga links.

Used him as a LAM is a 4-2-3-1. At first I played him with an engine and he was bang average, missing easy chances. Since I've changed him to a Hawk, he has become an absolut beast. He is best used to dribble round defenders and close shots to goal.

Pace - Play a chemistry style to boost his pace as 89 Sprint Speed can sometimes feel slow. Boost him to 94 and he feels rapid

Dribbling - He is very dynamic with his dribbling, skipping past defenders with ease. Cut in from the edge of the box, abuse fake shots and drag backs

Shot Power - With a Hawk he has near perfect Shot Power, one of the most important shooting stats this year.

4* 4* - I'd recommend playing him on the left to abuse strong foot, but his left isn't too bad. 4* skill moves is decent, you don't need to skill much with his dribbling stats

Strength - Sometimes goes down too easily when challenged

Stamina - A player of his pace with very average stamina, he can last a whole game but very barely. Feels much slower towards the end of a game

Composure - Can sometimes bottle easy chances due to low composure

In my opinion you have to play this dude as a striker! I got him together with my Emilio and they work incredible. They outpace and outdrible most of the defenders and both have a great positioning! The only problem is to get him on chem, so i would recommend Reus as a striker to make it happen. So i start in a 433 and then switch to 4222 ingame! Do this SBC honestly! I played Auba, Griezmann, Lewa, Mertens & Aguero but he clearly is my favourite (and "cheap") no-Icon striker!