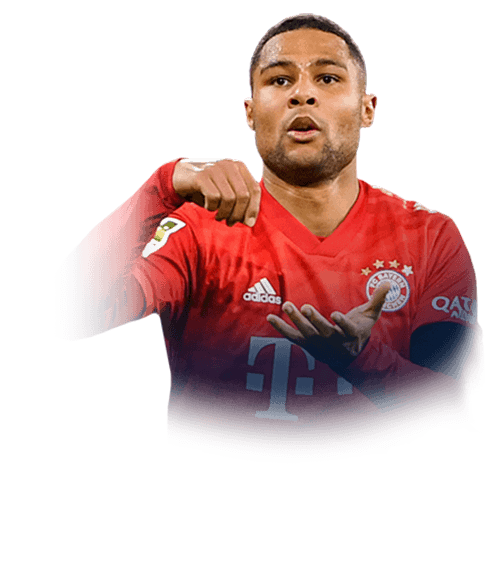 His real-life stats are currently 2 goals and 1 assists in 8 matches in domestic competition. He also received 0 yellow cards and 0 red cards.

After playing 15 games with him, i decided to review this card with just 15 games as i believe this is an extremely good card.. In my opinion he is one of the best wingers in the game. His stats for once are what they say on the card!! He is simply fantastic! Perfect Speed, balance, agility, strength, passing and finishing.

His aggression is not fantastic.

His finesse shoots are not great.

I wanted a Bundesliga Rw for my witsel, boateng and da costa. I did the guaranteed pack and got Gnabry. I was quite happy. In my first few games, I used gnabry on the right. When i ran down the wing with him, even when he was behind defenders, he always managed to run past them with ease. Defenders such as Van Dijk. His shooting is good too. He always find the bottom corner of the net. Overall I would recommend you all to use this card. Cheaper alternative to TOTSSF Sancho.

-Right footed on right side

Quick review guys - i play gnabry as ST and have to say he has been amazing for me. 20 games so far, 20 goals and 10 assists. use him with marksman. Defo worth the 440k i paid for him. Have him alongside crespo and they really well together.

First I have to say, when you play him as CAM don't do it. Striker or winger. I have packed this card untrade from an Bundesliga upgrade pack. He made as striker 28 goals in 58 online games. It is really fun to play with him.

I've used him in 11 games of WL so far, and he hasn't really lived up to my expectation. I dribble with my L/R wingers quite a bit to create chances, and he definitely felt less agile and responsive than TOTSSF Visca or even 86 James. He definitely felt stronger than typical wingers, but he didn't feel responsive enough to get past 90+ LBs yet not strong enough to push them off. I ended up relying on my LW to create chances instead. I'd consider him if you run exclusively Bundesliga squads, but otherwise, I don't think he's worth ~500k esp. with so many other options available.

As an Arsenal fan I love Gnabry in real life and he is one of my favourite players outside of the gunners. When this card dropped till 400k in Xbox I thought it looked like a bargain as there is no way someone with these stats will be so cheap. After I bought him I understood why. Although he is quite responsive, he isn't the fastest, id say similar levels to gold Neymar even when I put engine on him so it should have maxed him out. His strength is also pretty solid for a winger and he hold on the ball a little bit before getting bodied off for a little bit. His passing is pretty good and he actually makes really good runs but the main problem is shooting. HIs shooting is trash he misses 2-3 sitters for me per game and for some reason he manages to get into these positions to shoot but he always misses. His weak foot also feels bit worse than 4* as I have played over 30 games with him and he has only scored 1 goal on his left. I would stay away from this card unless it drops to under 300k then maybe try it but only on the wing as his shooting will really let you down.

Pace doesn't feel like 99 when maxed out with chemistry style