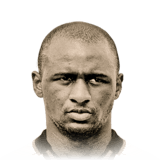 First, don’t worry about the stars. I don’t like using stars to judge a player. Hopefully you didn’t click on this review and assume I was trashing Vieira—I love him, even after 1026 games.

So, this review is not meant to be a review of the player necessarily but rather reviewing which chem style to use on him. I feel like, with Vieira in particular, there are a few stats you really want to boost with him but without extensive knowledge in playing with him you’re really not going to know what feels the best on him.

Also, if you’re considering buying 91 Vieira, just go for a Shadow 88 Vieira—he operates way better for his ideal role and you save a few coins. I’ll get into my rationale later, but just know this for now. This is mostly meant for people who have him untradeable.

With shadow, Vieira feels like the player you thought he would be. He closes down space rapidly, and has a kind of gravity well or magnet stuck to his legs—he’ll make about 4 or 5 interceptions per game which is actually life-changing in high-level FUT champs given how much people keep possession. Ideally, you will not dribble at all with this card. His passing isn’t noticeable, and he can recycle play well along with being an outlet to relieve pressure. If you complain about how Vieira feels on the ball, you’re probably not playing him right because he should not be dribbling.

So, if you’re now thinking “But I have, already, a player who is like that (whether it be Essien, Bakayoko, Sissoko etc.) and I don’t like to have two purely defensive midfielders on my team. I need an attacker or a box-to-box.” This is a fair reaction, however all I want to say is that this Vieira card has proven to be the best defensive midfielder on the game for me. I’ve tried quite a few cards to pair with this Vieira and sometimes I prefer to run a 4-2-3-1 where both defensive midfielders support the back line (Call me a rat if you wish, but it’s also because I run pressure on heavy touch and can be prone to leaving a lot of space). In my opinion, he compares favorably to high end options such as Allan, FB Arturo Vidal, Player Moments Goretzka, FUT Birthday Moussa Sissoko and even icons like Keane, Rijkaard, Essien, Zanetti, Petit and Desailly. Basically, if you have this Vieira card, it behooves you to play him in his ideal role and pair him with somebody who compliments him instead of trying to sacrifice some of Vieira’s ability.

Who are good candidates for this?—it depends on your playstyle. I can say my favorite compliments to Vieira have been 89 Rojas, 94 Fernandez (this card is very good, let me tell you), Scream Firmino (this is an underrated option), and I’ve even experimented with 85 Atal. 91 Shadow Zidane was a very fun time, having two French legends dominate the midfield, and I can definitely recommend that. If you have Witsel, I feel like Witsel’s ability going forward far exceed that of Vieira and that partnership could be deadly. Mid, prime, PIM Lothar Matthaus (I don’t know how to get the umlaut in his name but I know it should be there) is another great option. Also, if you have Gullit, there’s a reason why those two have dominated the midfield meta for so long, and I wish I could be you, because I really want to try Gullit at least once in my lifetime.

Finally, if you're wondering whether he should play on the left or right in the 4-2-3-1 or 4-2-2-2, I've played him in both spots and I genuinely don't really notice a difference. My best suggestion would be to play him on the side of the defense where you feel the least secure, but even then the difference would be basically negligible. It's a fair question, but ultimately I never noticed a difference.

When I first packed Vieira in my prime icon pack (sorry guys, I know a lot of people got screwed over by that thing and I wish you the best in the future), I first put an engine on him. I thought his passing was a little suspect, his agility and balance were way too poor to take seriously and obviously he needed that injection of pace. With 90 defending and 91 physical, there shouldn’t be much issue—right? Well, the thing is, if it were a different FIFA where 6’4’’ players don’t inevitably feel like trees, this was probably the play. However, given how FIFA 20 works, even with the dribbling boost Vieira will not turn like you hope. Does that make him worthless? No, god no.

Is Vieira bad with an engine? No, I played 200 games with him there and I never felt like he was bad, just not the player I thought I had gotten when I first packed him. The big issue being that if you want to play him as a midfield destroyer, you need that extra pace that comes with shadow, and you also need those extra defending stats. You feel a big difference when his defensive awareness is boosted along with his interceptions. And bumping him up to 95 pace is crucial because it means he can close down empty space quickly. Pace, I find, is mostly important on the wings and on the counter. You need a pacey defensive midfielder to catch all those stupid Ryan Kent’s running around, and with shadow Vieira can definitely do that. But, I found with engine that he can’t. Or not as well. Again, it’s hard to justify trying to play him as a more attacking CDM in the midfield double-pivot because it’s not his ideal role. You will not be getting the best Vieira. His shooting, for what it’s worth, the few times I’ve experienced it (1026 games, 43 goals) actually feels pretty ok, but he can’t fit into half spaces or spaces between defenders and that’s noticeable with this card.

Again, this Vieira is not bad with an engine, but you won’t be getting what you want. You have to shadow him. Even catalyst wouldn’t quite be enough because it doesn’t boost the acceleration as much as shadow and Vieira’s defense will be a little less secure. And generally, I find that passing as a section can only mean oh-so-much, at least compared with the others.

Lemme start off by saying that I packed him in my prime icon pack. When i saw the french flag i was like OMG ZIDANE but no it was big man vieira. At first i wasn't like proper gassed because I was having visions of ronaldo before I opened the pack. But then I took a look at his stats and his price tag and then I was like ok that was decent. At first I benched him but then my mates were dissing me for not using him. I put him in the starting 11 and then I realized what I had packed. Jesus HES UNPASSABLE. Hes that rock in midfield that i wanted.For the first time in my life I went undefeated in fut champs. My red picks were good as well. Everything about him is good. His record for my club now is 48 goals,18 motm perfomances and 28 assists in 98 games which is just mental for a cdm. The thing I like most about him is his defence for sure. Nothing goes past him. Shooting is pretty irreleavent for a cdm but his shooting is decent as well its not like whatever he shoots is gonna go in but decent. Passing is top tier as well and that 94 stamina comes in clutch as well.If u click the link to my squad u'll see that I play vieira at cam but that's purely because of chem reasons. In game he switches with vidal and kante switches with kimmich.One thing is there to be said tho that he is a little bit slow. That 85 acceleration is what I don't like about him. But if he feels a liitle bit too slow I bring pace masters!! If u look at ma bench oooof I have a lot of pace masters (DON'T HATE ME CUZ I HAVE KENT). 3*3* isn't great but it does the job.