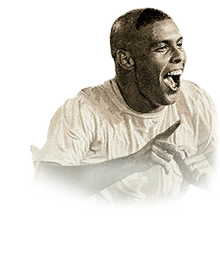 This is going to be an honest review because this version of R9 costs a lot and even you can sell this guy back into the market with guaranteed full price, you still going to lose significate amount of tax to EA.

He is the second best finisher in the game (I put Eusebio Moment the first place). But I still rank R9 Moment as the most enjoyable ST in this game as he has thick body type with fair amount of strength in combination with 5* skill. The combination of stats/body type/and traits makes this guy so fascinating.

Now his downside. Stamina, even though he can last whole game if you put him as stay forward ST. But later in the game 70+, his stats seems drop, becoming more clunky and slower. We need to accept that this version of R9 fixes the clunkiness of lower versions but when his stamina drops, you might not able to play him at his full capability. And that might be the reason why people mentioned that he is clunky.

Yes, if you love him in real life.

No, if you are results oriented.

I enjoy using him a lot. He makes the different, but honestly I need to sub him off at 65th mins when I expect a result.

Passing, not the best when you pay 15 mil but forgivable for ST.

First off lemme start off by saying I sold toty mbappe in form Messi and moments henry to get this card. I paid 14 mil in total for this guy.I wasn't sure at first selling such good players for this card but tthen I just thought screw it, i am going to do it. I am a elite 1 player so I was happy with how my team was functioning. With this guy... OMG. HE IS INSANE. Every dragback or skill is just crisp perfect. There are literally nothing bad about this guy. Shooting, dribbling and pace are phenomenal. At times he was feeling faster than toty mbappe.His record is 38 goals and 19 assists in 23 games for me. I am loving this guy. One thing to be said though is that sometimes he got dispossesed by baby ferdinand. For the premium price u are paying for this guy you would expect him go past everyone with ease but that's just the small con with this guy.My red rewards were better than usual too. I got coman and scharr. If I were to compare him to a player it would be toty mbappe and maybe toty ronaldo. All 3 of them are rapid but compared to them R9 was better at dribbling and just a tad better at shooting. Shots are insane with this guy. Anything that this guy hits will go top corner.I think he is the best card I have tried out so far. Although people might argue that there are players who are just as good for less money but they are wrong. Everything this dude does is just different and better.Gets along great with potm neymar as well.