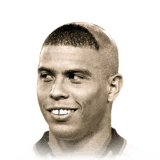 R9 is the single greatest card I have ever used in any FIFA, ever. I got INSANELY lucky in the Mid Icon pack and got this God of a player. Everything he touches turns to gold, and every turn, skill move, pass, and shot has been kissed by Pele himself as he blesses this man with a beautiful haircut and footballing wizardry. I'm a Div 6/5 player, and now I'm consistently climbing up in points as Ronaldo strikes fear into my opponents and forces them to rage quit. I've never scored more consecutive braces or hat tricks with any player, ever. I try not to force the ball to any one player, but with R9 he simply scores EVERYTHING. It's honestly ridiculous.

Weak foot, skill moves, pace, dribbling, shooting, height, haircut, everything is perfect. The only negative I've found is that he can get bullied off the ball despite his 89 strength, which is likely due to his low aggression. He also can get tired towards the 80th minute, but that literally doesn't matter because I just pass around and shoot from anywhere with R9 and he still beats any keeper. Other than that, he is literally an angel sent from heaven and I will not experience euphoria like the moment I packed R9 for a long time. The fact that I got him for trading in only untradeables for the Mid Icon Pack makes him INCREDIBLE value for me, but at 6-7 million coins to buy off the market, no card is worth that much. Unless you're made of coins.