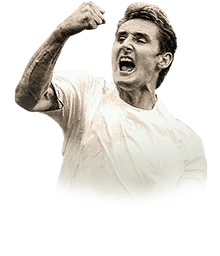 The best striker i have used in this game.

if he shoots it is in the back of the net.

he dribbles better than you expect.

and he is physical a beast.

and pace passing and dribbling are good enough

so I was lucky enough to pack him untradeable from a free 50K pack. I am in div 5, and I could not imagine myself without him, he basically carries me. His shooting is near perfect, the shot power could be inconsistent sometimes though. his pace is surprising, he feels like a 92 pace card, this is due to his great acceleration, with an engine it becomes 99! he is really strong, his strength feels like 90. his stamina is alright, nothing crazy. many people would expect him to be just a poacher, but he can be a great creator sometimes! his passing is really good and i have fast wingers that can cut inside, so they really benefit from him. I have him on balanced instructions, but he drops back a little too much for my liking. now for the card's week spot, his dribbling, he can have a terrible touch sometimes, and his balance is poor, on the other hand he feels pretty agile! mainly due to his body type, he is soo composed infront of goal, his ingame dribbling is pretty good. his weekfoot feels 5 star, I do not mind whether he uses his week foot, it is almost always going into the back of he net. he has insane heading, I have an untadable cr7 on the bench, so i like to cross it in, and if the ball finds the head of either klose or cr7, it's going in.

his touch could sometimes be terrible

his shoot power can be inconsistent