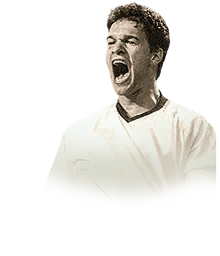 I had the aim to buy Moments Ballack and when he came out I was really surprised how good he looked. After some days I was able to fulfill my dream and bought him for under 2,5kk. i had no doubts, becouse I already played with his lowest version, but I got really surprised.

Pace (for a midfielder)

(Dribbling) just when you really want a super dribbler

I decided to make an review to him because i have seen that there are not much reviews for him.

The first games i played him with an engine to boost his dribbling with engine he was not bad but too slow,

so now to the stats:

his defending is very good he wins much tackles

his physics are good, good strength and he has a good jumping , thats why he can make heading goals