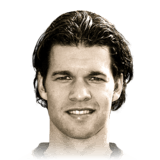 I used ballack in the weekend leuge and he is sick. He get important goals and assist and got me to 20-2 easy.

I am not experience in this 4-5-1 tactic but have to make a drastic change during the weekend league and I got the result. I added wingers as Salah and Mane instead of Dalglish and Kante and spent coins in Ballack in the center. He seems to be alone and I was pessimistic at the beginning but he shined and performed like Gullit. He became the heart of the team and he support everywhere with his 91 stamina. He did not feel sluggish at all despite his stats, which is very strange. Now, in this tactic, I do not think of any other player except Gullit since Vieira etc. does not deliver the gameplay in both sides like Ballack who is also looking for goals or open channels to other players due to the fact that opposition tries to mark him since he is always around the penalty area during attack.

I think he worths like 1.5 to 2 mil. due to his gameplay and this year he is one of the best like Zidane, Ronaldinho and Eusebio whom I tried also but he is much better than Vieira (88).

ALMOST EVERYWHERE ON THE PITCH

I packed him in my Mid Icon Upgrade Pack.

I wasn't surprised at first, but when I tested him in a few games, I really liked him.

He is one oft the best Allrounders in the Game.

(Sorry for my bad English)

He is very fast with Shadow.

Fast enough to catch up with an Mbappe.

I played him as a ZM and gave him the instruction that he should orient himself forward.

His Passing is nearly perfect.

He is mega strong and wins every duel.