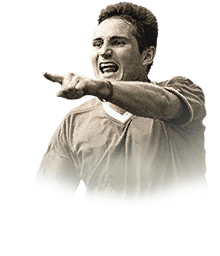 Wow - as I Chelsea fan I love both Frank and this card. Let me start of by saying that this guy is no Brazilian wonder dribbler, he is the classic English centre mid and EA have captivated the way he played in real life. You need patience with this guy but once you work out his strengths, he is unreal. The most noticeable thing about Lamps is his pinpoint passing - anywhere you wanna pass to on the pitch is it going to go there. The key to Lamps is to play him deep - I don't get these people saying that he is CAM ... he is not, you take him up from deep and you lob a pass up to your super pacey winger and its a goal. You cannot have lamps high because he needs the time on the ball cause he isn't that agile. If you can stall in the attack and wait for him arrive just outside the box and then pass it to him .... the ball is flying in the top corner guaranteed.

Where should you play Lamps?

TBH I have been playing CDM in a 4-2-3-1 and he does do a great job - defensively he is actually very good and is very physical; however, ultimately he should be being played at CM because this guy is an all-rounder.

Should you get him in swaps?

If you're a Chelsea fan you cannot miss out on him cause it would feel wrong, however, I would like to stress that you may well not get on with him if you lack patience and want someone who is super agile. He is definitely worth the grind though.

This guy doesn't get a load of assist but this because he is the one setting up the winger who gets the assist.

Overall straight 10/10 - not a better feeling than scoring with this guy.

Hope everyone is doing OK with quarantine and that you are all safe and well - Stay inside!

Shooting - long shots are unreal - he is a cannon

Physicality - never getting shoved off

Defending (you might think it is a CON but its not)

Balance is not ideal but is not that noticeable