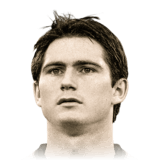 I'm going to preface this by saying that I am a big Chelsea fan, so I'm inevitably going to be biased by playing with my favourite player to ever play for my club. I've used this Lampard for about 264 games, scoring me 68 goals and getting a similar amount of assists. All of these games, bar like 10-20, were in either rivals (div 4 mostly) of FUT Champs. I would recommend playing him in an advanced role, as opposed to a CDM, as his work rates and high (for a CM) attacking positioning make him surge forward at nearly every attack.

Super Frank’s real life signature move was to always get into the box to score a cross of layoff at the exact perfect time, and I don’t know if it's placebo, but that's how he scores most of his goals for me as well. He isn't the most agile, and is relatively slow in all honesty, but he always seems to find a gap in or around the box that even my strikers don't make to get clutch goals. If your build up play is not very quick, than i'd recommend this card all day long.

Baby lampard is a big game player. He is very consistent and never ‘lets you down’ so to speak. It might be because I love playing with a lampard in fifa, but hes a big part of every game I play. As a CM in a 442, he's part of every attack, but also has the stats to get back and break down counter attacks as they’re starting.

His passing is top level as well. His 4* WF means you don't have to worry about passing to the LM or RM, because he can go either way. Once again, I’d say his key asset is his positioning. He gets forward at the perfect time to put away chances he usually starts as well.

When you first use this card, you’ll quickly find there is nothing ‘flashy’ or  anything that gives him the wow factor. He isn't the quickest and also isn’t very agile, so you cant  dribble past players well, or even be played through on goal with him without a Varane or Gomez catching him up. He does also get forward A LOT as well, so you can be vulnerable on counter attacks if you rely on him for defence, though this can be fixed with the ‘Stay back while attacking’ instruction, but with lampard i get someone different if you're using him as a CDM.