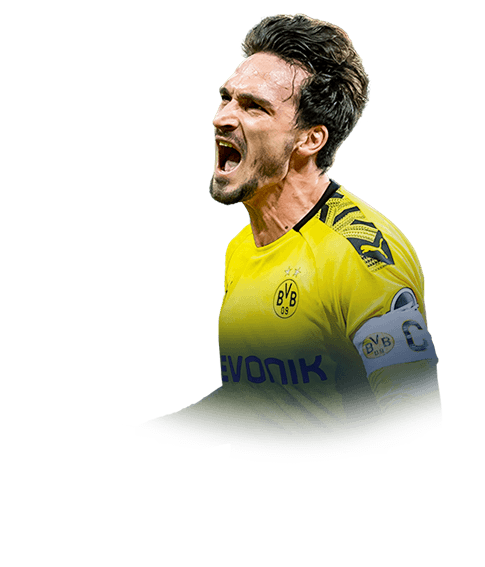 Guys i dont know why but for me He is a game changer i dont have even a shadow on him ( extinct on pc market ) and still he is always in position ive played with him 10+ games and none ever pushed him he is just way too strong . Low agility and still he is able to change direction or block shots in no time . For this price to link with Boateng it cant be wrong.

-Headrs in def and attack

-not so fast (always in postion so it doeasnt metter )

Hello everyone. Today I am doing a Mats Hummels review as I have recently got him from my player picks. I will be listing and describing every face stat of this card. And yes, his 66 FINISHING is higher than FUTMAS DOUGLAS COSTA'S by 1, which makes him even better.

Hummels definitely isn't the fastest CB in the game, as you can probably tell from the 68 ACCELERATION and 81 SPRINT SPEED. However, put a SHADOW on him and he will feel great. To be honest, he doesn't need the pace because his defensive positioning is so good.

With Hummels' HIGH/MEDIUM work rates, he may get up the field by himself sometimes, as he did for me. He was making an amazing run from deep and he was wide open when I passed to him for him to score a banging finesse shot. After all, he does have better FINISHING than FUTMAS COSTA.

Hummels is a great passer of the ball as the 98 SHORT PASSING and 99 LONG PASSING suggest, along with 95 VISION. He should have no problems passing the ball around in your defense.

Hummels dribbling isn't fantastic, but let's be fair, which center back has absolutely phenomenal dribbling? His 99 REACTIONS and 99 COMPOSURE are crucial for any defender to have. His agility and balance aren't bad either for a center back, having 78 AGILITY and 71 BALANCE. Altogether, he isn't too good of a dribbler.

Where do I even start. His defending is absolutely PHENOMENAL. His 99 DEFENSIVE AWARENESS really isn't a lie, as he is always positioned correctly in the back 4 (or 3 depending on your formation). No words for his defending. Good luck finding someone who defends better than him.

To be honest with you guys, he is such a big presence on the pitch as he is 6'3 with 99 STRENGTH. He bullies any and all attackers, and even looks big compared to my Laurent Blanc that I have next to him. The reason this isn't a 10/10 is because his 87 AGGRESSION could be higher, and but besides that, his 80 STAMINA is good for a CB.

Altogether, this is an absolutely Monsta card (As NepentheZ would say) and you would not regret buying him.

So this is my first time writing a review. I packed Mats hummels from the bundesliga garaunteed sbc. At first i was disappointed. But i decided to give him a try. And that was a very good choice. He was outstanding in the defense. He was better then Maldini (92). This is by far the best defender i have used in fifa 20. Always in position.