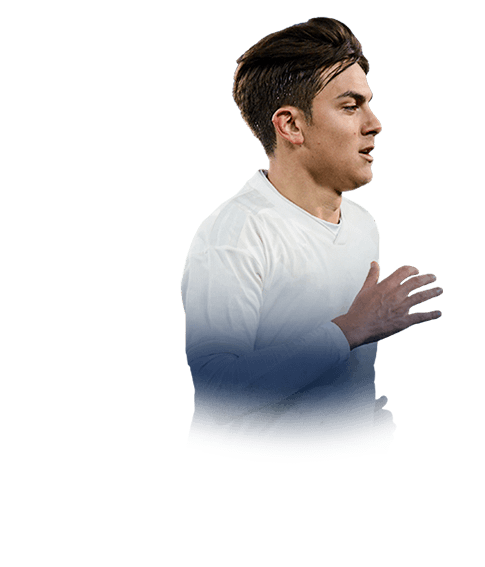 Ive tried many players from TOTS this year but none suprised me more the Dybala ive played 10 games with this monster and all i can say is that this is a real game changer.

Im useing 4-2-2-2 formation he plays as right cam with balanced instrucion and come back to def.

His positioning is outstanding he always looks for gaps ,and when he get a ball o lord have mercy not many players can catch him

Strangh? Maybe but he is small but still know how to fight for the ball even in def

Paulo Dybala. Wow. I packed this guy in Gold 2 rewards last week along with Ilicic, and I couldn't be happier. Imagine Griezmann's left foot, on steroids, that is Paulo Dybala for you.

Started this weekend 5-0, in the sweatiest, most rat filled WL all year, and this man has clutched me wins from the depths of 4-0 down TWICE! Scoring 16 goals in 5 games, that is astronomically good. His drag backs are very quick, and his right foot is as good as his left, the 4 star WF is a lie, it should be 5!!! His shots are rockets with a hawk, with multiple TOTS ter stegens grasping at thin air as Dybala hits the net before they can react.

Him and Messi tore it up for me so far, and hopefully it continues like that.

Seriously, pick up this card, it's a joke.

Outside the foot shot (filth)

I was really intrigued to try this Dybala TOTSSF. The WF boost to 4 star, the really well-rounded stats for a midfielder and having packed Gomez in my red picks this week, I thought I would make use of the strong link and try out Dybala. Besides, he's one of my favourite players IRL. This card though has serious problems. The workrates of Med/Med mean he doesn't make runs in behind, even if you tell him with instructions. His finesse shots are a myth. I ping beautiful finesses cutting in from RAM and the keeper always seems to get a glove on them. He doesn't feel as agile as you would hope either. Don't get me wrong, he's still a good card, but he's a real letdown of a TOTS card. He seems to be dividing the community atm, so maybe try him out when his price continues to drop this week (Ultimate TOTS incoming might cause more a drop plus WL sell off). For me though, this card was a fraud.

Finesse shots were disappointing, expected more given the trait, and his past iterations cutting in from the right hand side

Price - it's coming down now though. Even when expensive looked reasonable price given the stats, the potential links to CR7, Messi etc. and the fact its a 4 star WF Dybala. Plays in game like a 300-350k player in all honesty.

Might seem like an odd con, given the WF upgrade but no 5 star WF. With the workrates, he sucks out wide and if you play him central without the 5 star WF, he really is missing something. Gold Neymar plays infinitely better for me tbh.