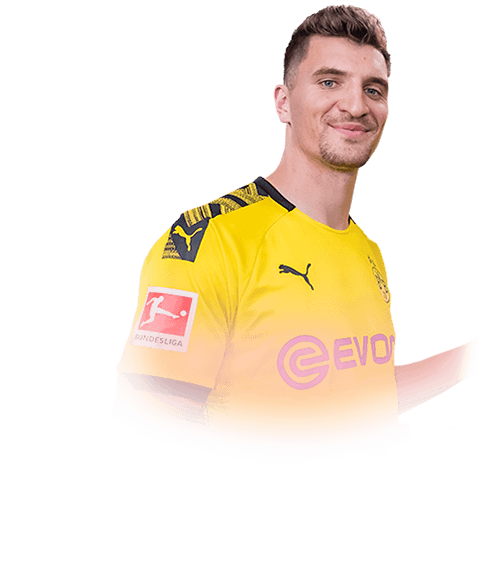 Thomas Meunier's Summer Heat card is rated 93, he is 191cm | 6'3" tall, right-footed Belgium midfielder (CDM) that plays for Borussia Dortmund in Bundesliga with High/High work rates. His average user review rating is 5.0 out of 5 . He has 4-star weak foot and 3-star skill moves, He does have a real face in-game. Thomas Meunier has 6 special cards with ratings between 82 and 94. He was born on 12-09-1991 and he is now 31 years old.

So usually I dont do reviews for Draft only players but in Meuniers Case I had to make an exception!

After attempting Draft three times just to get this man I was close to giving up but then he popped up: Borussia Dortmunds brilliant free signing and let me tell you one thing: forget about that clunky Witsel, this man is what every Bundesliga team owner would have needed! I managed to get three beautiful games with this man, before SummerHeat Kent completely destroyed me in 120th minute of the third game - oh how glad I am I don't have to see that guy outside of Draft (even though I understand everyone that loves him, this card is cracked, honestly).

But yeah, back to Meunier: even though EA had to give him almost zero Agility and Balance this guy actually feels quite responsive in game (considering his height and body type) which certainly is the case because the other dribbling stats make up for it to a certain extent. His passing is as solid as you need it in that position and his shooting is almost like Sahins (I actually enjoyed using him more than Witsel). Where he really shines though, are his defensive stats: this man is a beast and given hes is crazy huge in game, he can simply block off anyone! I suppose the best Chem Style would have been the engine, still I got him with the Hunter (what else EA, cheers). I have to admit though, that the pace boost was wuite nice, since I never really had any issues of catching up to players (not counting Kent, Mbappe, Neymar and Co. since theyre cheats).

To sum things up I can completely understand why people chose Dembele and Maximin over him, I would always prefer an offensive player over a defensive one too, especially at this point in the game! But as a Bundesliga fan and team owner I really shed some tears over not being able to play this man, salute to you, Mr Meunier!

If you liked this review and want to get the latest player reviews, predictions, team building and much more be sure to visit _futprof on Instagram. We are a rising ultimate team guide and appreciate every tiny bit of support we get! :) NOTE: since so many of you asked we are switching our whole content to ENGLISH! Hope youll get to use Meunier in Draft!

Defensive stats, Physical stats, base pace is quite nice, passing, height and the 4* WF