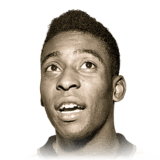 You want a review, so I keep the backstory short: Pulled him in my first rivals reward, turns out good cards do exist in these. So after 107 matches he is still exciting but I have long stopped overusing my new toy and can rate him as a player in a system. I'm in Div4 and played one WL now with him, finishing at 17 wins.

He is phenomenal as a CAM and Striker and a very good winger as well, while he is definetely wasted on that position. Since I switched him according to the match situation between CAM, Striker and rarely Winger I gave him the more versatile Maestro over Hawk.

He is a brilliant passer 99% of the time but still sometimes does these weird passes that go right into the defender, every player seems to do randomly. His dribbling is as good as his stats show you. Give him a bit of space as a defender and you're in trouble. He is just really hard to catch again once he's broken free. However, he is not strong enough to muscle off any centre back and you should avoid most contact with defenders. That shouldn't be a huge problem with his ball control though.

And once you get yourself into a decent position he is clinical outside and inside the box, while his finishing with maestro was "just" very good and not outstanding. His 4* weak foot is more than enough inside the box, outside you should prefer his more consistent right foot, which wasn't a problem most of the time.

Overall he might just be the most versatile offensive player you could get. You want to make use of this by having him in a central role, being able to use all of his 9.5/10 strengths at once. He is always gonna be a mismatch there and your opponent has to take care of him all the time. And maybe you pair him with other top players, for example Messi and your opponent just can't cover both (or more) threats anymore.

So 10/10 Shooting, 10/10 Passing, 10/10 Dribbling. Well, speaking of Messi: I just added him to my team and he somehow broke the scale I used before. He is just something else. His movement and dribbling is even mure fluent and his finesse shots added an element to the game that wasn't there before. Therefore I have to deduct a point for Pele in these two areas. However, I only got Messi for 10 matches now, so this might be some early excitement playing into my rating.

So is he worth it? If you have the coins, sure. He obviously is a guy you get into your team to get the last possible percent out of this position. This comes at a cost for every of the best possible cards. From that perspective his price seems about right.

Overall I have to say that I expected way more "WTF-no-one-else-would-do-that" Moments.

Of course he is a good finisher (with his right foot) and of course his dribbling ist amazing. But overall I think he's not worth the coins, because he is not that present on the field and his passing feels so weird sometimes. Also his left foot doesn't feel like 4* for me. He has not a single goal with his left. And I tried it a lot!

For example Mbappe has 25 scorers as a left wing all 33 games, which impressed me more.

+ Finishing with his right foot

+ Opponents often quitted after he scores

- 2.8 Mio coins is more for his name than for his ingame qualities

So baby pele... brought him in for a weekend league as i have never used Pele before (outside of draft). Used him in a 4231 at striker and CAM alternatively, first thoughts were that he felt abit slow and definitely doesnt feel as responsive as his dribbling stats make out. His shooting was very good inside the box on both feet but his long shots are not great considering i was using marksman chem card and he has finesse shot trait. His shots outside the box are miles off the likes of even a Politano . Cosidering the price of this card, he is worse than the 92 SIF Mbappe and that card is 300k cheaper if you get it at the right price. On the whole this card was quite underwhelming and if you can afford to, the extra 300k for 91 Cruyff is a much superior option. The standout attributes to this card were definitely his passing and his weak foot ability inside the box, the passing was very very good and he rarely missplaced a pass in the final third which is very important. As well as this his weak foot inside the box feels more like a 4.5 star weak foot so to speak. As i have to rate stamina in the review this is a strong point of the card to add, rare that he was tired, even after ET. Concluding thoughts are that for the cash this card is not worth it.

Not the most responsive player