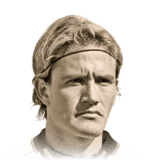 Got this guy in my prime icon pack which i grinded so so so hard for and was skeptical at first (not gonna lie i was hoping for eusebio) but i thought this guy was rubbish. boy i was wrong. he completed my team and partnered with POTM ben yedder, osimhen and aouar at CAMs and Luis Hernandez at striker of course, i now know why he is called el matador. he is just a great striker and i could compare him to an F1 car. even when he isnt on the ball his movement kills defenders. one time he made prime maldini look like an overweight cow. i cannot say enough about this card.

Pace: this guy is nothing short of a fighter jet. once he gets on the ball its bye bye defenders. shooting: everything about his shooting is amazing. there is nothing more to say. dribbling: his agility and balance and ball control and agility overall makes him deady and highj composure is good aswell. high/medium workrates is brilliant aswell.

3 star weak foot: the weak foot wasnt a big problem for me but i think he deserves at least a 4 star weak foot EA. passing: when you see the card 74 passing it looks really stinky but he gets the ball from A to B and his passing is not that bad. he has a decent amount of assists for me in divison 6 rivals and fut champs

I was really sceptical first when I got him from prime icon pack. Never ever considered to buy him.

But after reading some positive reviews about this player, I placed him to my starting eleven to try him.

Is he really so good that some players say.

After playing 5 rivals game, I sold my Mbappe because of him.

5 games 12 goals 3 assists. I was like wow, this player really suprised me.

Making good runs, positions himself really well and is almost always available to pass the ball.

Scores with left and right foot. Fast, agile he has them all what you need for a striker.

He doesnt need to be playmaker so passing is good. His main duty is scoring.

82 stamina is good enough for him to play full 90min.

My opinion for a strikers as they usually do goals near the goal, so weak foot doesnt really have

so much impact. He suits my playstyle really well.

If you shoot a lot from outside the box then you may see the difference. Matter of playstyle.

I have used Mbappe gold, Yedder potm mainly as my strikers but he feels so much better than these guys.

Somehow feels really calm with ball and when it comes to scoring.

Hawk seems to be good choice for chemistry style because it gives pace, physicality and shooting boost.

And best and only position for him is striker.

Some players really suprise you and he did that for me.

Try him, he might suprise you too and doenst cost too much coins for a prime icon.

Opinion may change after I play more games but now he seems to be excellent.

Really game changer for me.

If something have to say then