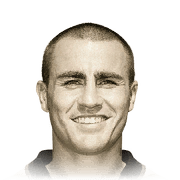 I bought the second version of Cannavaro on a whim and I'll be honest I didnt have huge expectations because I've been using the UCL Live Kimpembe and UCL sbc Laporte together who've been a rock together at the back. He went right in as Laporte's replacement and fits like a glove next to Kimpembe (i actually think he outshines Kimpembe which is immense.) All games were played in Div Rivals and WL. Cannavaro was everywhere in defense, and there wasn't a tackle he couldn't make. His slide tackles were the best I've seen on this game he had so many clutch tackles in the box sliding and lunging in. He was so quick and surprisingly strong, catching most of everyone that happened to get in behind. His stamina wasn't an issue which surprised me but I guess that's due to his L attacking workrate.

All in all one of the best investments for my team. He is perfect next to a Kimpembe type defender.

Always in the right place,

Last Ditch Tackles (he blocks so many shots this way),

Great Icon defender for 550k. (in terms of other icons not a bad price tbh)

Ball control (it was better than expected but he wont spring forward like Stones, Laporte, or Van Dijk

Not the strongest but holds his own