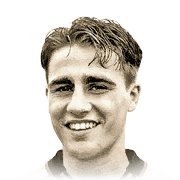 I had this card earlier in they year (early October) and the reason I bought him was because his stats look amazing for a baby icon. The only reason people don't buy this card as much is because he's 5'9, but those who have tried him know that his 95 jumping, which is actually higher than his Prime (93 jumping), makes him win 9/10 duels, with the only player to beat him being Ronaldo. You won't have any problems with his physically as he's strong enough to push the best attackers off with a combo of his 82 pace and solid Physical stats. His tackling, which is the stat I value most is amazing so he'll definitely feel like an Elite defender.

I eventually bought his prime & believe it or not, this baby card comes really close to it. The pace difference is only +2 for baby Cannavaro, but his sprint speed is +5 higher than the Prime so he feels faster. Tackling is obviously much better on the prime but like I said, they're really close.

He's a bit pricey (currently 680-730k), but he's the only defender ive tried that legitimately feels like a 90 pace defender with a chem style, & ive tried Varane. Not on Cannavaro's level.

Prime has higher physicality but this card has no issues.