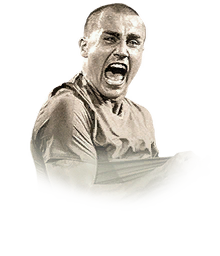 Sorry for my bad English, i´m from Germany.

After packing him in the loan pack i´ve got from the weekly rewards, i thought why not give him a try in the weekend league.

And it was the best idea i´ve ever had!

I played him next to Prime Ferdinand in a 4-2-3-1 with Red De Gea in Goal and Vieira and Petit as Double 6.

Never gives up a ball, runs up and down the Pitch to get the Attacker stoped and he also has Like that AI Positioning and Marking, where you can controll another Player and he´s automatically moving perfect with the upcoming attacker.

Pace: He is very quick on and without the ball and can turn immediately becaus of his high Acceleration and Agility

Shooting: Only headers are for me personally counting at shooting for a CB, and he is very good in the air and also has good heading accuracy

Physical: Even if he is 176 cm tall, he wins alot of headers and feels also very strong on the ball

Passing: Not the best but very good for a CB

Only negatives about this Card is maybe the Height for a CB, i mean 176 cm is not very tall compared to CB´s like VVD or Varane.

And the other Negative is his Price, i wouldn´t spend about 2 Mio. Coins for him, but if he drops to 1,4 or even lower he would make it in my starting Eleven.

I used to use Prime Nesta but he causes so many unnecessary penalty and too slow to react at most dangerous situation.

I use all my untradable cards and Nesta for this Capitano Fabio Cannavaro, the golden ball winner 2006.

He is too good at defending, strong, giant leap and powerful heading. Surprisingly, he can outjump the dangerous target striker such as Zlatan Flashback and CR7. He's the cleanest tackler among all my defender. Since i use him, i never concede any penalty yet.

The best of the best... don't judge the book by the cover... i mean don't judge him bad because of his height, his jumping and heading are monster.

-His defensive ability is like Kante + Sergio Ramos combine