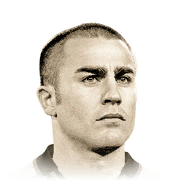 Im very Surprised that there is not any review of this amazing player. I will tell my storie. im a gold 2, gold 1 player. I play very good , but as millions of players my defensive abilities are not the best to be at elite 1. So i decided that from all my coins, 65 % will be to improve defense, because any good ST or CAM can score good goals. I mean , you know what i mean. Maybe a Lewandowski IF fails a shot that its scored by Gabriel Jesus Gold. So, i decided to buy the man who captain Italy to champs in 2006 and won the ballon dor the same year. The rest is history. Im mean, he is f***ing perfect. He can run, he can header, he can throw himself to the ground as an animal. He has more strength than Lukaku. He is the f***king Perfect CB.

I mention all the pros above but the most and beatufil one, is that it feels that a more taller Papu Gomez but with AMAZING defensively stats. im Mean, he has agility, he has speed. But the real one, the base one. HE IS THE BEST.

I don't found anyone in mms 23 games with him.

Let me start with this (a bit of context): I love italian football (irl and fut). I play FUT for fun mostly, my max in WL is Gold 3/Gold 2 (maybe I can even get Gold 1, but I do not bother because of the rewards). I had Nacho (UCL)/Azpilicueta (Gold) and Ramos as CBs and I really wanted an Icon. If I had money, I would buy 92 or Prime Maldini, but I do not have that kind of money for one player.

About Cannavero: I was worried about his height but in game, it doesn't feel that bad as I expected. I'm not sure what is it, but if I had to guess, I would say that Reactions, Pace, Jumping and Heading Accuracy they all contribute to make Cannavaro be first at the ball. If it doesn't jump first, he doesn't really get to the ball, but at least he forces the attacker to be innacurate.

If the ball isn't in the air, this guy is awesome even in extra time. Sometimes I have the feeling that he is better in extra time even against some fresh subs. Yes, he has short legs, but he has the knowledge to be where he needs to be. Stamina isn't really that big of a deal. Sure, 85-90 stamina would be great, but it's decent.

In my opinion, you can't really reproduce what he was on the field. The teams he was in had big goal scorers, but the defensive structure was on top (look the World cup 2006). And even Cannavaro himself said that, as a defender, it doesn't matter how tall or short you are, how fast or slow, you need confidence. You can't reproduce confidence in FUT.

The last thing... I will not give 5 stars because of Maldini, who is the best in my opinion. Cannavaro is great, Maldini the best.

-jumping and heading accuracy (even though he is short)

-his height (but not all the time)

-stamina could be better but work rates help