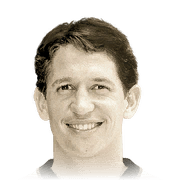 This guy is absolutely amazing. A goal machine. For the first 5ish games I despised him, wanted to sell him. but I had to give him another chance. He then scored 12 goals in 3 games. Alongside my SBC FFS Joelinton who can win headers and surprisingly give good through balls they are unstoppable. I used a hunter on him which gave him a considerable boost in his shooting.

After EA patched ffinesse shots I knew I needed a pure scorer. there is times when he consistently bagged 3 goals for a few games in a row.