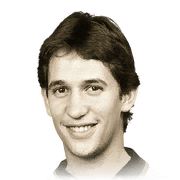 I've been trying a number of different Icon ST options for the past month (93 Van Basten, 92 Nistelrooy, 91 Trezeguet, 91 Kluivert, 91 Shevchenko, etc.) for review purposes, and the prime Lineker was definitely the most enjoyable and best lone ST option for a budget of 850,000 to 1.25 million coins in my opinion.

*I plan on writing reviews for the rest of the aforementioned icon STs within a week or so.

His shooting, particularly in close to mid-ranges and around the box, was remarkably accurate and saved me from numerous difficult matches. His trait of beating defensive line with 90 acceleration (without any chem boost) provided me with an ample amount of one-on-ones with GKs. He definitely is not a fancy dribbler or finesse shot master, but he is agile enough, strong enough, and fast enough for any formation or style of offense. While there may be better options with more coins, I strongly think that the prime Lineker stands to be the best option for anyone looking for an icon lone striker under 1.25 Mil.

I was a bit skeptical about this card simply due to the fact that I almost never run into a team with him during the weekend league.

Well... this card has been probably one of the best icon strikers I've used so far. It has basically almost everything you want in your striker - excellent pace, shooting, offensive positioning, ball control & stamina. I strongly feel that my team's offensive productivity has been taken to another level with this card. This card is a very good buy at 1.1M. and is better than most, if not all, other icon striker options under 2M. I highly recommend you to try him out!!

Had the luck to pack him in a 100k pack during lightning round. My instant thought was to sell him, but since this is my first packed icon ever, wanted to try him for a bit first. Best thing I ever did. Played 10 division rivals and the results were amazing: 10 games, 22 goals and 3 assists. I play 4-1-2-1-2 with Jesus IF at CAM and Sturridge Flashback as the other striker. I play him with maestro chemistry style.

His 90 acceleration is very noticable, even in this fifa where pace isn't everything. You can give him a through pass and he will leave defenders in dust, especially in the first few meters.

ABSOLUTELY insane. With maestro slapped on him, he has 98 shot power and 96 long shots. Just shoot it from distance, won't even have to finesse it neither do you need to time it. 1v1 on the keeper is no problem for him. With 95 finishing he puts it away for you

Not the best, but not the worst either. As a striker with get in behind instructions. I don't really pass with him a lot. Short passing with maestro is 93 and very noticable. Can easily give a nice pass inside the box

I don't defend with my striker... Though his 88 heading accuracy makes providing him with some nice crosses a very nice thing to do

85 stamina is very nice. Only thing is that vs Van Dijk etc. he might get bounced away easily with his 79 strength