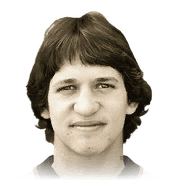 I'm going to break this review up into individual statistics because I've used Lineker for about 100 games and really enjoyed his card. I think he deserves credit and the time to break it all down for those that haven't tried him yet. I used Prime Lineker in a futdraft and sub-sequentially went onto win that draft, my first one this fifa(I'm a more casual player) and well Lineker was the star man. I looked at his versions and decided on the second one because of the higher pace thinking he would get more chances per game and boy do I agree after playing 98 games with him. There's no noticeable difference between this version or his prime in my opinion, so save yourself the 200+k and get this one if you want one of the best strikers on Fifa.

In terms of how the individual stats feel in game:

Pace: he is incredible. He's so quick and paired with the tries to get in behind trait Gary does in-fact get in behind the defensive line multiple times a game. Watch for his runs between the defenders and play a ball through. Pick yourself a ball playing cam and watch Gary track those spaces down and exploit the opponents defense. I run him with two wingers who can whip the ball across to him in an instant. Gary also excels with low crosses because he simply outpaces defenders and gets to the right positions.

Shooting: Lineker is one of the best finishers in the game. In the box he can finish everything and anything he gets to. His shot power and accuracy are up there with the best in the game. I was using IF Lewandowski prior to Lineker and I would say his finishing is on par. Lineker's power shots are much better than his finesse. Gary has low curve, however his accuracy is so good he can still bang in those timed finesse shots. Longshots? Go for power. He has no problem scoring screamers for me and also is always in the right place for tap ins.

Passing: This is one stat that is a bit tough to deal with. His passing is not the best but you can manage. His short passing is very consistent hence his higher assist count with me but his long pass or through pass is utter crap. Just make mental note to eliminate those types of passes from his game.

Dribbling: Here again is one of Linekers so/so stats. He has good enough but with 3* skills and so/so dribbling I don't want you to think you're getting a neymar here. He can run well with the ball at his feet but his touch isn't the best so he will have big dribbles at full speed. Gary's bread and butter is running into the wide open spaces. Exploit those and he will be hard to catch.

Defending: This one actually surprised me because he has a low defensive work rate, which is actually perfect for a striker imo. But He actually continually presses the back line and does so very well. He does a great job of poaching some passes and closing the defenders down at high speed. He blocks a ton of passes and creates counters.

Physical: Not much to report on here. He's stronger enough to shield the ball in most situations. He will get knocked off balance by the bigger stronger defenders but being so quick he can also break away from those defenders sometimes as well.

Overall: Lineker is one of the elite level icons/strikers on the game. He may not be able to do everything including dribbling etc, but what he can do he does very very well. Keep it basic with Lineker and use his strengths. He will exploit the opponent over and over again.

Speed + get in behind trait = breakaways galore

I never actually write reviews about players, because I think it's a waste of time. But this card is really ridiculous! I was looking for a striker who finished all chances, and that's him! He is fast, strong, and has a huge finish. I have already used many strikers such as: Vardy (86) Lewandowski IF (92) Suarez (91) and other icons, but he is really for someone who wants a valuable striker.