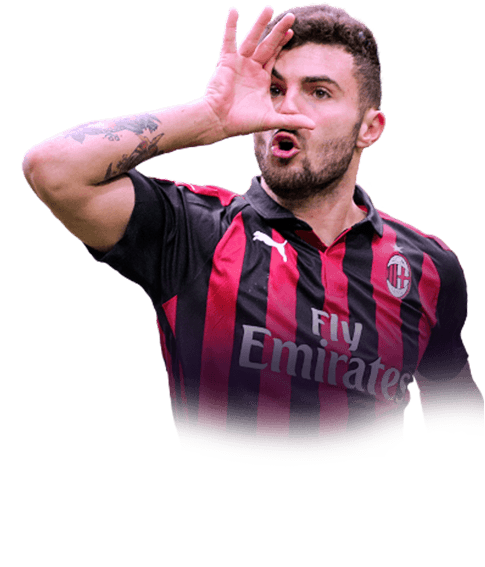 When reading the title of this review, you should just about understand what this guy is all about. All he does is score goal after goal and then some, he is seriously the living definition of a finisher who can definitely finish his dinner whilst still being hungry for dessert. When I first saw this card on EA's twitter account, I thought, "Wow, he looks really good, but doesn't quite seem to be an end-game card." this put me off buying his for the first few days as I wanted to see where his price settled. At about 300k I made the purchase and it was quite possibly one of the best i've made all Fifa.

I played Cutrone up top in a 41212 (2) formation alongside POTM Hazard, as I thought a skillful, dribbler type player in Hazard would go perfectly with a poacher in Cutrone. Throughout the 10 games I played with him, this man scores for fun. Long shots (even though it says they are only 74 trust me, they are not), timed finesses, low driven's, headers and even occasional bicycle kicks would all fly into the net with ease, leaving even the best keepers in Courtois and De Gea looking like Karius in the Champions League final.

No player has never made me write a review about them, but Cutrone is something else. He isn't cheap, I know you'd expect a lot from a 300K Striker, but trust me, this guy delivers. Anyone who says otherwise must be delusional. First of all, 96 Attack Positioning and Finishing. Anything that comes off his right foot is bound to rip the net. The 89 shot power goes hand in hand with the finishing. 3 star weak foot isn't an issue for me as the high finishing compensates for it. As for his pace goes, its pretty good. He's able to get in behind the defense and sprint on towards goal. His dribbling is strange, IMO. It's not like its horribly bad or fantastic. Its somewhere in the middle, but leaning more towards good. The 4 star skills make this card very usable. His passing is decent. He is very good at making quick one touch passes with 90 short passing. However, as for long passing I do not recommend it unless you have no choice. He is however to send a lobbed through ball towards wingers who make wide runs. Physicality is also a highlight for this card. With his stamina, he is more than capable of lasting a full 120 minutes. Strength and jumping are better than expected. Being 6 feet tall with 91 Heading is fantastic.

For any other Serie A users out there, this card will not dissapoint you. I use the Hawk chemistry style on him and he's got 53 goals and 7 assists in 47 games for me. (FUT Champs and Rivals)

After using many different serie A Strikers, I decided that this guy should jump straight into my squad. And fortunately, this was a great idea! This player is amazing! To be fair, I packed him untradeable from my Division Rivals rewards. Thank you FIFA gods. Thank you.

He has great shooting, he's a killer from inside and outside the box. Also, he has a great stamina, which allows him to stay in the whole match with energy.

SHOOTING (he is a killer)

PACE (he is not the fastest man, but his pace is satisfactory enough)

JUMPING & HEADING ACCURACY (such a nice combo, wins many headers, and scores the majority of 'em)

LONG PASSING (you won't realise that his long passing stat is that low in game, sometimes, it seems like being approximately 80. But most times it seems lower).

FREE KICK ACCURACY (well, just pass if you don't have a better free kick taker to take it).

WEAK FOOT 3* (not the best, not the worst, but his three star weak foot is a real one. Misses many shots while using it).