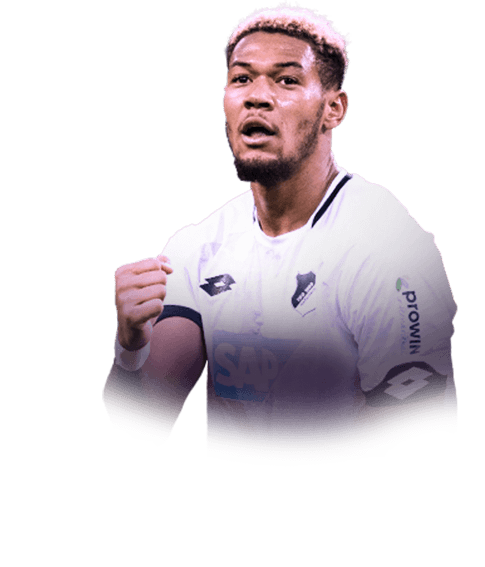 I feel the word "Beast" is thrown around a lot in this Fifa 19 community but never have played with such a machine upfront. when the sbc first came out and I saw this cards insane stats I feared that he would be 100k+ but 35k is such a bargain for a well all rounded striker which links up to great players like Neymar, Reus, Fabinho, Marcelo,Alex Sandro and many more great cards. He slotted pretty easily into my team along side futmas Coutinho and red inform Fabinho. I regretted not doing the Zlatan Flashback Sbc quite a lot so happy this card is similar. I know that a 3* skill moves is not ideal but then again I heard that most future stars are getting upgraded so fingers crossed Ea will do that. I changed my formation to a 4-3-2-1 in game so that he would get plenty of crosses into him. This card was reviewed on a hawk.

Having 90 strengh and being 6'1 means that he will never glide past players like an Mbappe or Douglas costa but he still tears defensive lines up with his powerful drives through the centre of the pitch. I personally reccomend using him a one striker formation so he has more room to make those powerful drives and other reasons that I will come to later in the review. Overall though pace has never been a problem with the pace on this card and a hawk gave him an extra 5+ pace which got him up to 91 overall pace. I don't like using hunters on cards like these as I don't think he really needs that much extra pace as he isn't that sort of player but other players would disagree.

I always find a 4* weak foot the minimun a striker should have due to this meta not exactly making weak foots that good so I was happy to see a 4* weak foot on this card. Anyway with whatever foot Joelinton never struggles to find the back of the net from outsider inside the box. Having 95 strength (with hawk chem style) and being 6ft 1 means that this card will never be pushed off the ball (unless you've got TOTY VVD running at you full cry) which gives you a lot of time to make sure you've got the right angle and generally just gives you more time to pick your shot. 90 base stat positionning also helps him with crosses and through balls. Also do not let his composure put you off as I've never had a problem with it.

A 90 strength and 89 agility combination is always a deadly duo and theres no exception here with Joelinton. I don't see the need to use a driblling chemistry style on him as he's never going to glide across the pitch and already has good agility and balance. As I said he dose not glide across the pitch like and never will due to his size but still feels nice and smooth enough on the ball. £* skill moves isn't ideal but I did hear that some future star players weak foot and skill moves get upgraded so hope its him.

Don't really need to go into too much detail about his passing as its nothing special. 81 short passing just about gets him to be able to make some nice link up play. 66 curve is not ideal but I've never had any problems with it.

One of my favourite things about this card is his insane strength and jumping. 95 strength and 97 jumping with a combination of being as tall as he is makes him a great Ariel threat and therefore wins most Ariel rules against defenders. With this new meta being focused mainly around deep or just normal crosses this card fits beautifully into that meta making him a very ideal striker. I did used to play with Futmas Lacazete up top but he just didn't work for me as he couldn't win any 1 on 1s or headers. Overall his strength and jumping combo makes him very deadly in the box

Hope you enjoyed the review!

I prefer to have a team of tall & physically dominant players with high composure, aggression and strength. I typically start with Balanced Defence and Long Ball attacking strategy but after observing my opponent, will change to either 4-2-2-2 or 4-2-3-1 depending on the opponent.

Why did I do Joelinton?

I've been holding on SIF Werner for a few months as a sub but IMO, he's too expensive (bought for 220k yikes!) on my bench and doesn't suit my play style (low composure and does not have the strength to handle physical duels). Sold him a few days ago for 204k and used that to complete Joelinton for maybe 5k + untradeables

I intend to use him as my backup for Lewa and chemistry for Havertz at CAM. Applied a Hawk chemstyle taking him to 90+ pace and 90+ Finishing & Positioning

Considerably faster than the rest of my forward line, his combination of pace & strength make it easy to drive forward against the defence. Recall a few times where he outpaced & outmuscled a couple of CBs to score

Between Lewa and Joelinton, I feel that both of them are on-par in terms of finishing. I would rate Lewa slightly higher for his longshots but Joelinton definitely can bang them in from outside the box if you give him the space

My play-style heavily depends on my strikers working together to create chances and Joelinton can make those simple straightforward passes. I depend mostly on Ibra for his playmaking and through ball magic to unlock the defence

He's the most agile between Lewa & Zlatan but to be honest, I don't feel it matters as much for my game. Composure is only 77 but personally, I feel he's pretty decent with finishing so I wouldn't worry too much about that

Heading is only 77 but I feel his height compensates for it and his agility helps with pressing opponents high up the pitch. Also helps that his jumping is excellent at 90+ with Hawk applied

If it was not indicated clearly at the start, I LOVE tall players and Joelinton at a towering 6'1 is your counter attacking catalyst. When defending a corner, I instinctively punt it to this beautiful man-beast with 79 aggression and he gets the counter attack rolling. Using his high strength and decent aggression, he gives me the crucial seconds I need to let my midfield/forward make runs on the counter

Joelinton is a great addition to any bundesliga/hybrid team. His height & physical traits make him a very unique type of target man that can definitely add a little extra to your team. He would get a 9 or 9.5 if he had 4* Skill Moves but that's what Lewa/Zlatan/KDB/Havertz can provide

For 40-50k, Joelinton is a great option to have on the bench because of his unique traits & skill sets. Tall with good finishing and great physicality. He suits my target man & direct play style and if you subscribe to that play style, I would highly recommend doing the SBC

I was using IF Gabriel Jesus until I saw Joelinton Future Star sbc. I had all players in my club so I didn't spend more than 2k on this sbc. I placed him in my team and did a test in Division Rivals before going into Weekend League. Joelinton might not score every time he's got the ball but his shots are really powerful and his finishing (with Deadeye) is outstanding. He is also very dangerous at corners because he is 6'1''. But his biggest advantage is his strength. He easily pushes Davinson Sanchez, Varane or VVD to get to the ball and then he scores with a very powerful shot. Some of you might think that due to his low stamina he won't be able to play the whole game but it has never been a problem to me.