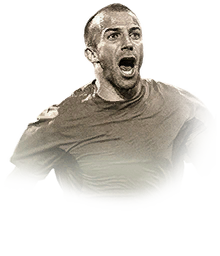 Hi guys, this is my first review on futbin.

I saw there isnt a review on the prime moments version of him, so i decided to write one for all of you who think about doing his sbc.

First of all i played a lot of games with Del Pieros prime in Fifa 18 and i loved him. So i did his sbc and i have to say i dont regret it!

I change him ingame to the middle cam position in a 4231 and he's brilliant!

if u played with hazards potm card and enjoyed it you'll definetly enjoy Del Piero also! (And he's better in nearly everything than Hazard)

But for me Del Pi is not a winger! if u want to have a winger go with someone else! But as a cam he is the best playmaker i played with this year!

I play him behind cr7, left cam is potm hazard and right cam is prime raul and his through balls to them three are so so good and precise! His shooting is like pre patch! Finishing and shooting in generall in game better than my Cr7's! After the latest patch i often really struggle to score goals but with this card in 9/10 times he'll easy finish his chances! His finesse longshots are the best i experienced this year.

Last year Delpis stamina (82) wasnt good enough for me when playing him on cam position. Now he has 85 and you will recognize a difference! Nevertheless i like my cams with 90 stamina so thats a little little downside for me. But not a reason to take distance to his card!

In general hes just a fun player and a fun card! hes a mix between Messi,Aguero and Hazard. If size and strength isnt a problem for you, you'll definetly be happy with this Del Piero.

His Pace is really good now! i play him with hunter and on counter attacks you can outrun the opponent with him. But pacewhise hes not like neymar or mbappe but you'll feel a differnce to his normal prime card!

If you have the coins i really recommend his card!

Before i did his sbc i had prime moments bergkamp on cam position and i have to say bergkamp has more presence on the pitch because of his size and strength but appart from that he's not better than this version of Del Piero! Shooting,Pace,Passing,Dribbling - all feels better on this Del Piero

Thanks for reading my review, i would like to get a feedback and have a nice day :)

-stamina is good but could be sometimes a little better

No matter what foot (left or right), right or left angle, inside or outside the box, he just doesn't miss the target except when I overpower the shot. Looking at his stats with Hawk Chemistry applied, he has 99 in most shooting categories, 93 long shot. What else? A 5-star weak foot. That means when he gets the ball, press the shoot button and the ball will go into the net. He is not the fastest but he can get into an open space so fast, the defenders get no chance to block. In a run behind situation, he will lose the sprinting race with the fastest defenders but not to the average pacy defenders. I find that he is best as the ST in the 4-2-3-1 and CAM in the 4-1-2-1-2 (2) formation. Why ST? because of 5-star weak foot, 99 shooting, and low stamina. Placed him in CAM, he will last to 70 mins at most because he always runs back for defense even though I set him to stay forward. I don't understand this as his defensive WR is medium. He scores more free kicks than Messi. His dribbling is very good 2nd to Messi, Neymar and players with 95+ dribbling

Tbh, I was really excited when I saw this card and grinded my ass off to complete his SBC, I rinced my whole club to do it.

But man, he disappointed me so much, I already dumped him into Ronaldinho SBC, which you guys should aim instead of this SBC. He scored and assisted 112 goals in 250 games as a central CAM in 4-1-2-1-2(2), I'm just a Gold 1 scrub in fut champs btw.

He is so weak, and most importantly his balance just triggered me so hard several times.

I do "NOT" recommend him, If you have coins, go for FUT Birthday Mbappe, Perisic RTTF even regular Neymar.