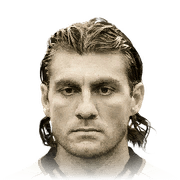 I used Vieri back in FIFA 16 when they were Legends, not Icons. As soon as I realised he was coming back into it, I had to give him a try again given the Meta of FIFA 19. I tried Shevchenko, Cavani and Van Nistelrooy before, but man Vieri blows them all out of the water!

This year I find strikers that are strong, can header and finish are much more useful than the standard pace demons. Vieri is always in the right position for an finish, and almost any shots on his left foot go in, as long as he is not having to do a stupid 360' turn. His 4* weak foot is a god send and don't be turn away because of his balance and agility, as with the right chem style (I use Marksman) it helps a lot. His positioning, finishing, headers and hold up play is incredible.

I change formation in game now, thanks to the new tactics system. I change to a 4-2-3-1 normally and will play Vieri up top, with Mbappe and Mane as the wide CAMs, Pogba Central CAM, Matuidi and Fabihno as CDMs, and Sandro, Skrinar, Manolas, Florenzi and Handanovic as the defensive line.

I've been lucky packing some quality players that has given me the chance to buy a world-class player for my team: so I've decided to buy the middle version of Bobo.

Physically he looks like Lukaku (I've got him as a striker last year) but technically the difference is enormous: finishing is awesome (90% of the shots he takes are on target), offensive movements to beat the defensive line are always deadly and his pace...In some matches he looks untouchable. I suggest this player for everyone who loves a physical striker to turn the game production into goals

Every kind of finish

Stamina (you can solve the problem through player-instruction: "stay on attack")