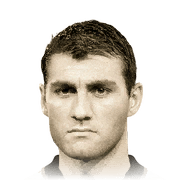 So where do I start of? I first bought Robby Baggio and played him as a CAM, he was wonderful. Until the 50' where he was already dead. So i wanted an other Italian Icon.

I bought him for 920k i think (Prices where a little higher). I have now played 20 games with him as a ST. To use him I had to change my formation and play with 2 Strikers.

In the beginning I thought that Immobile while completly disappear. But, that was truely not the case! They play really good together!

The first match i played with him i saw a tall and big guy, standing beside koulibaly and i thought: Damn! This guy is more a tank then Koulibaly! In my first 10 Games i struggled a bit to score with him. So he only had like 1 Asist and 4 Goals. The more i played with him, the better i got. He is now at 20 Games with 27 Goals and 3 Asist.

I dont know how many goals i would have had scored with him if i wasnt such a bad finisher. Absolutely amazing posistioning, can shot on target like 10+ per game.

With Hunter on him, he has 93 Pace, which really is enough. Didnt noticed him as very fast, but was never a lack.

I mean this guy really knows how to shoot. Slap Hunter on him, 96 shooting rating then. Doesnt matter if outside or inside the box. He just bangs them in like nothing. He is also a very good header! You dont notice his 4* Weak foot. Just shoot with both feet, he rarely miss the target.

Doesnt miss much passes but doesnt make much asists neither.

I am not the type of player who dribbels past 100 defenders. I like passing 1 or maybe 2 players with a fake shot.

He is a striker, im not judging that.

Absolute Beast, you can not push him aside or so. He also has like an "Aura" which dares you to have respect.

I am not even thinking of replacing him in the future, altough i could afford higher rated players. He is just so much fun to play with.

Cannot think of something bad...

On a very quick note, I originally got Hagi from the SBC, but I found him to be so disappointing that I decided I couldn't wait for the next Icon SBC. I would advise you to steer clear of Hagi.

In the air, the only more dominant player I can think of is Cristiano Ronaldo, who happens to be 2.5mil. For the price of 750k, you can bag yourself the most lethal aerial weapon on Fifa 19. But if your play style is more about quick passing and through balls, Vieri can do that too. Let me be honest when I say his long passing and vision is average, but for those short one-two's his 85 short passing makes him more than capable.

Generally, he is an incredibly capable player, and if you play to his strengths you too will reap the rewards that this monster brings so often to the table. I'm typically a Gold 1 (22 wins - feels bad) calibre player, and I have a very good team to support Vieri. However, even amongst Neymar and Hazard POTM he is the player I will always give a chance to if I am given the option. I am currently using him with the Hawk chemistry style, because I do not believe that A) he needs an agility and balance boost, and B) that any them style would make a significant difference to this.

If you're looking to do future Icon SBC's and want someone to play with in the meantime, I urge you to consider Vieri. I was very skeptical myself, and his face card stats are incredibly deceptive. Look in closer detail and you will see that he has some ridiculous stats.

Overall I would recommend playing him in a two-striker formation alongside a nimble forward, but he was also exceptional in the 4-2-3-1.

This is card become monster if you use the hunter chemistry. For me is amazing striker who never betray me

Passing: very sharp and decent in short range. Shott pass is 85 and this is enough

Dribbling : playhim as a tank, he's quite a unique player, with a low agility and ballance stell strong and keep the ball.

Defending: Not applicable for a ST imo but he does the job of defending from the front well. He is strong, he is poacher