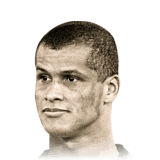 If you are looking to have some fun in FUT with an elite striker, you have found your man. I packed his card untradeable about 2 months ago and was initially let down that it wasn't Pele. 170 games later its safe to say that he is one of the most consistent players in my team regardless of the gameplay. He has the left foot of a God. The shooting stats on his card genuinely let him down, he has the best finesse shots ive played with and rarely misses a good chance from inside the box. Obviously his biggest con is his 2* wf but after 170 games it isnt something that bothers me as much as I thought it would. His short passing with the weak foot is reliable enough to play quick passes in the box which is all I really need from him. I also found that playing a 5* wf to support him at CAM makes him a lot deadlier. With an engine his dribbling becomes elite despite the fact that he is 6'1". His height allows him to shrug off many tackle attempts and allows him to receive the ball with his back to goal and turn the corner on defenders quickly. With his chem style he has 90 pace which is more than enough to beat defenders on breakaways given his strength/height can keep defenders at a distance.