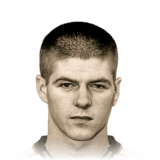 Pace: Does he feel slow? Not at all!

Shooting: Positioning and long shots are amazing. He is always there where I need him to be but he sometimes misses the goal due to his 83 finishing.

Dribbling: I like his dribbling and his ball control is amazing which is very important for a central midfielder.

Passing: Do I even have to say anything about his passing ability? This guy simply knows the art of passing.

Defending: I use engine as chemistry style which makes the defending his weakness for me. Since I play him as CAM (come back on defence) it doesn't bother me much and to be honest I wouldn't recommend to play him as a CDM. I would say his defending is OK but nothing compared to a Doucoure IF, Kante, etc.

Physicality: 87 stamina and 88 aggression? Say no more! He is everywhere and I mean literally everywhere. You can count on him until the very last minute.

In my opinion, Stevie G is a game changer and worth 19 tokens! He is not the guy who will score 5 goals per game but he is the guy who creates the chances you will need! If you are looking for a player like him then go for this card and you won't regret it. I am in div2 (almost div1) and very happy that I chose him.

"When I die, don't bring me to the hospital. Bring me to Anfield. I was born there and will die there"

In the late '90 and first yeasr of 2000 a Legend was born. Looking at the image on the Icon card you have the impression to look at a youngster and infact, he was. The card resemble the 2001 period when this huge player manage to win a "minor" treble at the age of 21, holding Liverpool midfield as a veteran.

If you are stil thinking about what to do with your swaps well, the time is come: go on this player and ensure in your team a player that will improve your midfield to next level. All the other top-tier alternatives like Drogba, Owen, Butra etc... are amazing, BUT... how many other box-to-box midfielder for THIS level you may have (basically for free)? I personally played around 20 games (I share the account with my brother-in-law) both in Rivals and high-difficulty Battles and I will report my impressions:

Presence on the field

one word: huge. He's everywhere: on the same action you may see him on the difending third interceptiong a ball, then pinpoint pass to the winger and after that you may see him runs to the attacking third to help the strikers. He will stay on the pitch like additional 3 players, and the key is his high/high workrate that joined with a good amout of stamina and aggression will provide you an excellent box-to-box player. Do not put any instructions to him, otherwise you will lost 50 % of his potential. Pair him with a chaindog in the midfield like Kante that provides to the team the necessary defensive tasks.

don't want to bother you, but very few palyers got this combination for pace, shooting, passing and even dribbiling, among both Icons and IF, Gold etc... Some top-tier players are more technical but lack defensive attitudes (eg De Bruine and Pogba), other are more defensive players but got worst stats for technique (eg. Kante). Gerrard is NOT good as the top CAM or CDM, he's just in the middle but very near to the top. Is just like a Mercedes Benz, not fast as a Ferrari or agile as a Lotus but well rounded and affordable.

To summarize, I can say that Stevie G is NOW a top-choice for the people who need to change the midfield, both if you decide to play him i a 3-players-midfield or paired with another player.

He's a game changer? Yes an no. If you compare him to a real game changer like Gullit, you can realize that the Englisman is very far from the Dutch colossus (that can dominate the midfield, can score with both feet, can score headers, can win tackles, can cook like Michelin Star chef, can clean your house, can satisfy your girlfriend and your sister simultaneaously and much much more).

Well, Stevie will stay as my captain till the end of the game, even like supersub after TOTS, no doubt.

Oh, and by the way... my review is not on faction... I'm an AC Milan fan and for me this guy in real life was a nightmare (for the young readers, google "Champions Leauge 2005 final").

Thanks you for reading

Maybe skills, but men buy the fu**** Neymar if you need a skiller!!!

Ok so I've been using this card for the last month. ive tried many chemistry styles that i thought would benefit him.. Lets go over them shall we. Dribbling is king in fifa 20 so its important to give him that agility and balance boost if possible. He feels quite clunky without the correct chemistry style. in my opinion, an agility boost to 85 and balance too 76 is better than agility to 80 and balance to 81

Shadow- Hes quite fast, and his defensive stats feel higher than they suggest, his interceptions are great. The only problem i encountered with the shadow is that if you hit people with speed he will fall over a lot due to his low balance. Good if the rest of your team isn't pacey enough.

Guardian- This is my choice for a CDM or even just midfield. his defensive awareness seems insanely good. he intercepts everything and he controls must easier, only problem again, being him falling over.

Sentinel- One way to counteract him falling over is to increase his strength, the sentinel does just that. he is still clunky but stays put rather than falls over.

Engine- The engine is the all rounded chemistry style that seems to be the most popular choice for people as on paper it looks nice. it does do the job well and gives him a little pace boost while pretty much maxing out passing. In all my experience with him i can tell you i cant tell the difference with his passing, its just always crazy good. i find its harder to score with him as his finishing is a bit low. the pace boost is not that noticeable either. But it does stop him falling over.

Sniper- I find he is continuously in the right spot and always in a prime position to score. but finishes badly. so i chose a sniper. it pretty much maxes out his finishing. he already has great long shots and shot power so no matter where you are you can score a goal, inside the box or outside the box. which is important because hes always in the right position. ontop of this is provides a +10 agility and +5 balance thats needed, aswell as the all important +5 composure. with this massive dribbling boost he jumps in between opponents now and can hold the ball much better than before. it seems too over all boost every stat. and by far the chemistry style for him. HIGHLY RECCOMENDED

Smart on the pitch