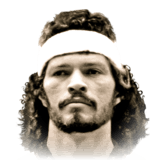 I sniped Socrates on Thursday when the rewards came out to make some profit, but after I played some Rivals games with him I came to the conclusion to play the WL with him and sell him afterwards.

I would consider myself as a casual player, I usually end the WL at Gold 2-3, and in this review I will compare Socrates to Eriksen, with which I played like 100 games already.

Lets start with my feelings about him after 40 games. Socrates was an immense upgrade to Eriksen, he scoared in almost every game for me and what I loved most about him, you can't push him of the ball. I play in the 4231 formation, Coman and Lucas Moura are my wingers, Dembele my striker and Socrates the CAM behind them. I really loved playing with him and he carried many games for me, I want my CAM to be kind off a second striker, deadly in front of the goal and with runs in the depth. Thats why I used Deadeye, and to be honest he felt sometimes very heavy to me (which could be changed with Engine), but without Deadeye he was not deadly enough in front of the goal, which is more important to me.

I played my whole WL with him and around 10 games Rivals, and Socrates was really a gamechanger for me. In 41 games he scored 37 goalds and assisted another 10, but like already mentioned he felt way more sluggish than Eriksen when it comes to dribbling, but his positioning and his runs compensated that for me. His short passing is very good, but in comparison to Eriksen his long passes are not that accurate. The biggest Con for me was his stamina, he has 85 but I always needed to sub him out at min 60-70. However, even though his workates are Middle/Low, compared to Eriksen who was High/High Socrates was running more than Eriksen, in defence he always ran back to the box, in offense I found him in the other box with some nice offensive runs. But a player from his price should play the whole 90 (or 120 sometimes) minutes in my opinion, but maybe that is just due to my instructions that he ran so much. Despite his height he didn't score a header for me, but he won the most areals in midfield which is more important for me.

Can I recommend him to you? 100%, the best player I have used this FIFA so far.

I'll start with saying that I was largely underwhelmed with the selection in Icon Swaps 2 so had the attitude that you couldn't really make the wrong choice. I needed a CAM so it was between Socrates and ADP. I took the former because he was available sooner, allowed me to get another Icon and is a very unique player on the game.

The short of it is, he isn't the Meta CAM that most people are looking for. He can be clunky especially in bad game play and his work rates are undesirable; he's probably not as effective as other options out there. BUT MY GOD IS HE FUN.

I used a Sniper on him to give the bigger boost to his Agility than Engine provides, it maxes out his Dribbling, Ball Control and Composure which turns him into a classy SOAB. It maxes out most of his shooting, his finishing is up there with the best I've used, and his shooting from outside the box is also very good. His positioning is exceptional despite his work rates with most of his goals coming from being found making a late run the edge of the box.His Passing is also top tier, which in my opinion when combined with his great Ball Control and Composure, makes up for his low Agility and Balance as his first touch is always solid and he doesn't mess up his passes, so you don't need to dribble around with him. That being said, his 99 Dribbling with Sniper is very good with close control, but he doesn't glide past players.

Socrates is very much a system player, I can't see him fitting any formation or position than central CAM in a 4231. Referring to my title, it is absolutely essential that you have fast, agile players around him who can alleviate the stats that Socrates lacks and make the most of the areas he excels in. I used 89 IF Mane, Mbappe and Neymar around him meaning the their pace, dribbling and positioning allowed for great runs to take the pressure off Socrates and make the most of his great passing. Their ability to play quick 1-2's, get in behind from a Socrates pass and then pull it back to the arriving Socrates makes for a brilliant Meta dynamic.

Unique, Fun player to use

Shooting of every kind

Balance in all game play