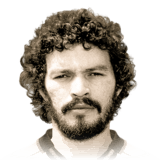 WOW. All I can say. First review because this guy has wowed me, and i've played with zidane, ronaldinho and pele this year, and IMO this guy is better! I think this guy is relatively cheap compared to other similar calibre icons due to the fact he played a long time ago, and a lot of the user base aren't so familiar with him. I played him at CM with pogba (Kante CDM, Neymar CAM) in 4-1-2-1-2 narrow, and although his defensive stats are not the best he was absolutely insane. His 5* WF means his passing and shooting is amazing on both sides, and really supports the dribbling and help you become completely unpredictable. As you would expect from an icon costing 1.3m he is basically awesome in all areas apart from defence, but I think the thing that makes him stand out from the crowd is his strength, he's strong as an OX, and that coupled with the fact he's 6"4 (the size of blanc) means that nobody gets the ball off him, but at the same time his dribbling is comparable to that of a much smaller and (usually weaker) CAM (say insigne). All in all I loved this card, and I will never sell unless I upgrade to his CAM. Way better option than Kaka, Ronaldinho etc

Strength - I play with pogba, and kante in midfield and he feels stronger than both by far

Size - Again 6"4 aids his strength (I guess that's what helps at least), and he wins every header

dribbling - wow. I was worried he'd be clunky because of his size and his balance, but hell no, he glides

4* skills are smooth and solid

Balance - but I didnt really notice it

Defending - his strength compensates for this so he does actually win a lot of his challenges anyway, but in a perfect world more defending would be amazing (especially interceptions and def awareness)

Agression - I personally like snappy 90+ aggression players in CM, but I can sacrifice that for all his other qualities. 76 isn't the worst.

He's insane! he made 17assists/22goals in 20 WL matches. i'm a normal player with gold1 or gold2 rank, but he improved my squad so far! i've used hunter on him and pace isn't a problem anymore. i suggest him absolutely.