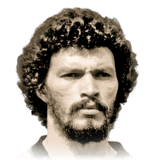 i know what your thinking, 60 balance....No thanks. If you are a numbers man you clearly ain't looking at this review as your already long gone. If you are an intelligent person who can comprehend that only by using a card will you understand how good it is then welcome.

I don't know the history of Socrates, i never actually heard of him before FIFA 17 tbh. I tried him last year and he was amazing, i thought this year with the meta being what it is i am likely to find him worse. Nope, i tried his baby and it was ok, tried his mid in drafts and it was really awesome and then i picked him up for 1,400,000 on Xbox and thought it seemed really cheap.

This card is insane, the best CAM i have used in any FIFA (including Ronaldiho who i also rave about) The best thing about this card is that he seems to just be where you want him, the amount of balls he intercepts is crazy and i run him with an engine!

His 5* weak foot means on the edge of the box from either side he is scoring and his passing is immaculate.

I cannot wait until his prime moments comes out!

Dribbling (not even a little clunky)

So I got this guy from my prime icon pack, and he's been incredible for me so far. At the time I was looking for a CAM and was probably going to pick Laudrup or Kaka, but I settled for the pack. Initially, I was a little skeptical of Socrates dribbling (60 balance) and height because I thought he would feel slow and stiff in game; however, I was quite wrong about this. I used an engine on him and it really helped because it boosted his balance to 70 and agility to 88. With this chem style he feels really good because it give him the needed dribbling and some pace. In terms of his passing, as a CAM, its excellent. He places balls perfectly to teammates who make a run to goal and other players on the wing. But what really makes this card special is the shooting. Its phenomenal, the best I've seen on this game. His shot power is ridiculous in game along with his finishing. Another important stat in regard to shooting is his positioning which seems better in game than 88. He makes excellent runs and is always in the right place at the right time.

I'd like to also say that this is my first review

This is the only word describes him best! I just wanted to try him out because I would like to play a big player with 5* WF, but for sure I expected a clunky dribbling man who turnes like a bus, but what I get was nothing but amazing!

He played as my Striker in a 4-2-3-1 with Engine the whole Weekend League (23-7) and ends up with 38 goals and 11 assists. For sure the scored massive more goals the first 15 games, but also he is absolutely your man if you need a goal in a sweaty game! His strenght is the key for him. You can pass the pall, he will defend him, will turn and then you will the just a rocket flying into the net! As you may expect, its totally wayne if you shoot with his right or his left foot.

This guy is currently the biggest surprise for me in Fifa 20. I will try out his moments within the next 2 or 3 weeks I think! Nothing but love for you Socrates! <3

For the most deserved 5* Review, if you can handle a big player like him you will have a lot of fun!