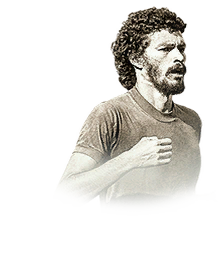 Probably the best player I’ve used this year. Certainly the most effective! For context I’ve used TOTY Mbappe, 95 Pele headliners Neymar to name a few. The thing that sets Sócrates apart is his size at 6ft 4in he’s a handful to say the least. Once he’s the other side of the defence you’re simple not stopping him. His pace with a Hunter is quick and his strength keeps the quicker defenders behind him. His acceleration is surprisingly good especially out of skill moves. 4 star skills are great and I would go as far as to say if he had 5 star skills he’d be the best player on the game hands down. His 5 star weak foot makes him deadly from all angles. His shooting is crazy, powershots fly in, finesse shots the same. His passing is also another one of his strengths, every passing stat is over 90 and it feels like it too. I play him in a 442 upfront with POTM Messi. I’m an elite player and so far this weekend in champs he’s flying.

I haven’t found any.

This year i decided i would try and use as much players as i can instead of saving coins because it's the only thing that keeps me playing the game. I think the best player of this FIFA is Neymar, even the regular one. I haven't tried the top ones (above 5 million players) because i think it's stupid spending all my coins in one player and have nothing else alongside him. This week i decided to get Icon Moments Socrates and oh my god i took the right decision. Socrates is like a combination of TOTY De Bruyne shot, Drogba strength, Gullit height and the most important his movement on the field is on the likes of Mbappe which for a man 1,92m tall is astonishing. I tested him in 10 rivals games (DIV 3) and my first 15 games of the WL where i got some shitty conexion and even though he just delivered perfectly. I use him as a mid CAM in a 4231 formation and he is just anywhere on the pitch. He goes back to get the ball, brings it up to the goal and then finish with a screamer or an assist. Overall i think he is the best or at least one of the best players in the game just because he can do anything at an almost perfect level. If you have the chance to try him, you won't regret it.

He is quick (even with the ball)

Maybe price (2.1M atm i think is good enough but will get lower)